Tamil Nadu is expected to win the match.

The 2nd semi-final of the 2019-20 Syed Mushtaq Ali Trophy will be played between Tamil Nadu and Rajasthan at the Lalabhai Contractor Stadium in Surat.

The match starts at 6:30 PM IST (01:00 AM GMT). This match will be live on Star Sports 2 and Star Sports 2 HD. Live streaming will be available on Hotstar.

So, after weeks of pulsating contests, swashbuckling hitting, upsets, marquee encounters, damp squibs, and of-course a plethora of humdingers, we are finally down to the business end of the tournament.

The four semi-finalists have been decided and in a bid to confirm their spot for the title-clinching clash, Tamil Nadu and Rajasthan will lock horns in the second semi-final in Surat on Friday. Tamil Nadu has had an imperious tournament thus far. Barring their super-league defeat to Karnataka, Dinesh Karthik-led unit has swatted aside anyone that has come in their way by spinning a web around them courtesy their spinners.

They’ll now face Rajasthan, who has had a rather inconsistent campaign thus far. They booked their place in the semifinals courtesy a nail-biting two-run win over Delhi thanks to Deepak Chahar’s swashbuckling knock of 55 off 42 balls; one that included seven sixes and zero fours and ably backed by an all-round display from their bowling unit- led by Arjit Gupta’s 3-12.

It is expected to be another perfect day for cricket in Surat on Friday. According to AccuWeather, it will be a bright and sunny day with the temperature hovering between 22 and 34 degrees celsius. No chance of rain is predicted.

In the last game played at Lalabhai Contractor Stadium between Mumbai and Punjab, more than 450 runs were scored. However, in the two matches before the Mumbai-Punjab encounter, batting proved to be really difficult with the spinners ruling the roost.

Average first innings score: 170 (In the last 8 T20s played at the venue this season)

Tamil Nadu– Washington Sundar’s batting has been a real revelation this season. The right-handed off-spinner has been in amazing hitting form and has racked up crucial contributions for Tamil Nadu thus far in the tournament. He (193 runs at 48.25) along with usual prospects in Dinesh Karthik (264 runs at 37.71), Baba Aparajith (111 runs) and Shahrukh Khan (116 runs) will be crucial to their fortunes.

As far as bowling is concerned, R Sai Kishore has been a real find. The off-spinner is the leading wicket-taker (19 wickets at 8.84) of the tournament and along with M Siddarth (11 wickets at 3.90) and T Natarajan (12 wickets at 14.00) has been the cornerstone of Tamil Nadu’s bowling unit. 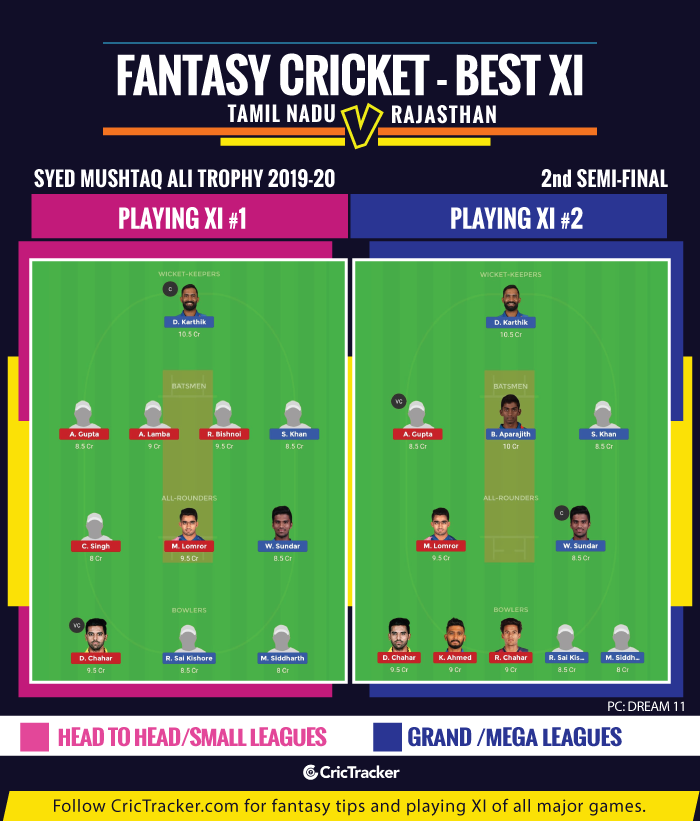 Tamil Nadu’s spinners have been the cornerstone of their success in the tournament. Hence, opting for them as captain/vice-captain should be worth a punt.

Tamil Nadu is expected to win the match.