Washington Sundar joined Tamil Nadu and opened the innings in the previous game.

The Group B, Round 7 match of the 2019-20 Syed Mushtaq Ali Trophy will be played between Tamil Nadu and Vidarbha at Greenfield International Stadium in Thiruvananthapuram.

Tamil Nadu is currently leading the points table with four wins in five matches. And, their bowlers are in the red hot form with T Natarajan being their leading wicket-taker with 11 wickets in the tournament. Also, the orthodox spinner R Sai Kishore has grabbed 9 wickets till now. But, their batters are still due to give some good performance with their willow. In the last match, Washington Sundar had joined the squad and the side now looks stronger than before.

Murali Vijay and Dinesh Karthik have scored the fifties in the tournament but have not looked in touch so far. And they will be expecting to smack some runs in the upcoming encounter against Vidarbha.

Vidarbha started off well in the tournament with four consecutive wins. But, their winning streak came to a halt in the previous game against Kerala. So, they would be eager to regain the momentum which they lost in the last match. The batsmen of Vidarbha has to come up with some brilliant batting display against Tamil Nadu if they want to outclass Dinesh Karthik and Co in the upcoming game. Also, the team’s leading wicket-taker Darshan Nalkande’s form will also play an important role in the teams’ performance.

There are fewer chances of a thunderstorm in spots across the city, but it will not affect the length of the game. Meanwhile, according to Accuweather, air quality will be unhealthy and harmful for sensitive players.

The match at Greenfield International Stadium is expected to be a low scoring affair because the track strongly assists the bowlers. All the encounters played on this venue have been a one-sided affair because the majority of the games have been won by the chasing team. So, the team winning the toss will look to bowl first.

Dinesh Karthik has got a fifty in this tournament and is coming to bat on number three position for Tamil Nadu. This will give him a proper time to score some runs. Also, his experience makes him a vital pick for Dream11 Fantasy side. All-rounder Washington Sundar will be an important player to watch, who can well contribute with the ball and bat. He joined the team in the previous game and smashed 46 runs.

For Vidarbha, Darshan Nalkande is bowling really well and has scalped 14 wickets till now in the tournament. Also, he registered amazing figures of 3/34 against Kerala. 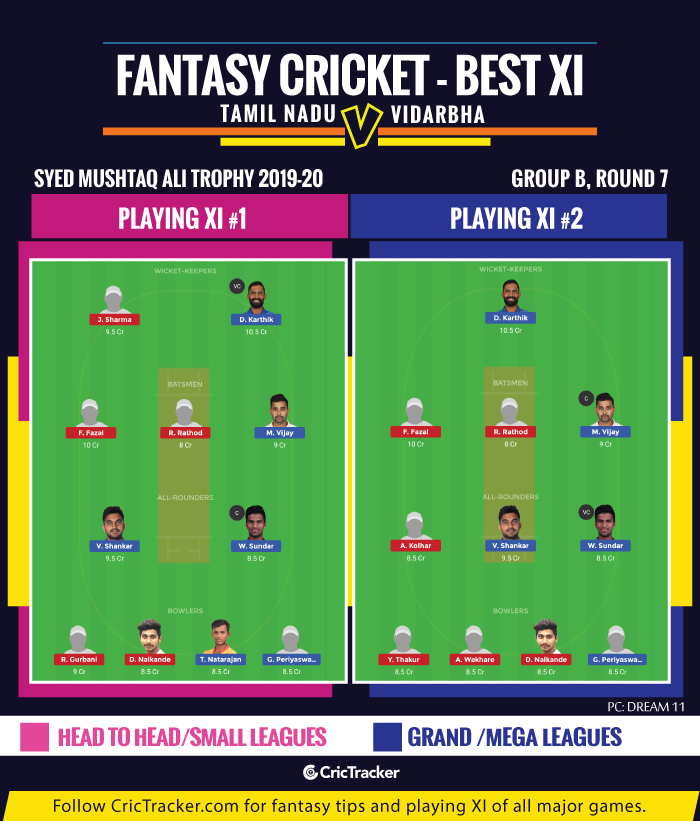 Washington Sundar has joined Tamil Nadu after some brilliant performance during the T20I series against Bangladesh. Also, he performed well in his first game of the season. So, he should be a wise pick in the Grand League team.

Faiz Fazal of Vidarbha has got the starts in the previous games but hasn’t managed to convert them into big scores. However, he might look to gain his form against Tamil Nadu. So, the left-handed opener will be a risky pick but will be worth it.

Vidarbha is expected to win this match.