T10 League 2018: Match 6, Pakhtoons vs Rajputs, Match Prediction: Who will win the Match?

T10 League 2018: Match 6, Pakhtoons vs Rajputs, Match Prediction: Who will win the Match?

The teams had contrasting starts to their campaigns.

Pakhtoons and Rajputs have had contrasting starts to their campaign of this year’s T10 League. In the inaugural match against Shane Watson-led Sindhis, Mohammad Shahzad’s blistering 16-ball 74 carved a 10-wicket victory for Rajputs. Shahid Afridi’s Pakhtoons were no match for defending champions Kerala Knights as they slumped to a defeat by eight wickets at Sharjah Cricket Stadium.

The two teams are now set to lock horns in the first of tomorrow’s tripleheader at the same venue. Another win for the Rajputs would keep them in a positive mind frame ahead of the second round and they have a jaw-dropping Net Run Rate of +14.60 as well. On the other hand, a defeat for Pakhtoons would create enough headaches for them as far finishing among the top teams is concerned.

The pitch hasn’t had much to offer for the bowlers. The short boundaries have also ensured that the bowlers have a tough time in the middle as the batters have made hay. Nevertheless, the bowling units have also shown that they can get under the skins of the batsmen provided they are ready to bend their backs. Teams are likely to chase after winning the toss.

The Pakhtoons may rope in former Indian pacer RP Singh as a replacement of Englishman David Willey. The Windies duo- Chadwick Walton and Andre Fletcher- are the openers. Colin Ingram and Cameron Delport are the men in the middle order with Muhammad Kaleem to follow. The pace attack also has Irfan, Sohail Khan, Shapoor Zadran. Dawson and Afridi are the spinners.

The Rajputs will remain unchanged. Shahzad and Brendon McCullum will be looking to give their teams another blistering start. Ben Dunk, Rilee Rossouw and Laurie Evans have to shoulder responsibility in the middle order. Rohan Mustafa, Samit Patel and Carlos Brathwaite are the all-rounders. The team has three others pacers in Tymal Mills, Munaf Patel and Sayed Shirzad.

The prediction is for Rajputs to win the match. 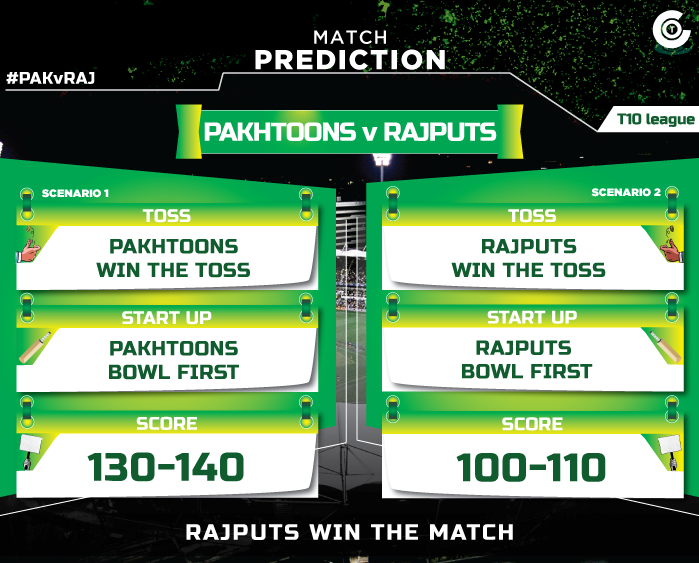