Two of the strongest teams in the T10 League this year, Northern Warriors and Pakhtoons will battle it out in the first Qualifier.

Two of the strongest teams in the T10 League this year, Northern Warriors and Pakhtoons will battle it out in the first Qualifier on Saturday. A win here will mean a direct entrance to the final while the other team will get another opportunity. There isn’t anything that differentiates both these teams and it should be a cracker jacker of a contest. Both of them have got some good resources and highly balanced sides.

The Northern Warriors, however, have been the more dominant and oppressive team. The side, after losing to the Bengal Tigers in their opening encounter, didn’t lose a single match. They have won five in a row and will hope to build on the momentum. The Warriors have got the fiercest top four in the batting order which is their biggest strength.

The Paktoons also have had a similar fate in the tournament. The only exception is that they lost both the first as well as the last encounter in the league stages. They managed to keep a four-match winning streak going in between. The team would hope to get over the loss in the previous game and be positive going into this critical encounter.

The last day of the league stage witnessed lots of runs being scored and the batsmen didn’t have much trouble unless they played a false shot. The situation should be similar going into the playoffs and the first qualifier could be a run feast. The weather during the match will be sunny and the temperatures could soar all the way up to 30º C.

The Northern Warriors tested their bench strength in the previous game and still managed to win it very comfortably. However, they will want to play with their best XI for this encounter and there could be a few changes. Andre Russell, Rovman Powell and Wahab Riaz are most likely to come back. Nicholas Pooran, yet again, will be the key leading into this encounter.

The Pakhtoons will mostly make two changes in their XI for this encounter. Firstly, Shahid Afridi is sure to return into the side as the skipper. Secondly, RP Singh will also make it back. However, there is some ambiguity about the players whom these two will replace. Any two among David Willey, Muhammad Kaleem and Shapoor Zadran must sit out. Kaleem is most likely to retain his spot.

The prediction is that Northern Warriors will continue their brilliant run in what could be a close encounter and be the first team to enter the final. 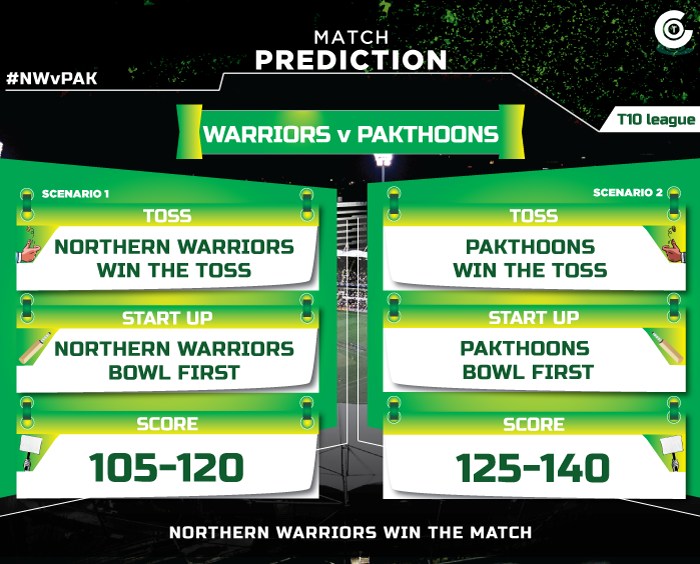