Can the Arabians, Abu Dhabi and Tigers get their first points on the board?

Super Sunday is set to witness another tripleheader at the Sheikh Zayed Stadium in Abu Dhabi. Northern Warriors slumped to a 66-run defeat versus the Qalandars and will now wish to make amends against Team Abu Dhabi in the afternoon game. In the second game, the Karnataka Tuskers are set to lock horns with the Bangla Tigers, who lost their opening match against Deccan Gladiators.

The Tuskers rolled over the Delhi Bulls and will wish for back-to-back victories. In the last game, Maratha Arabians will lock horns with the Qalandars, who decimated defending champions Warriors in the last match. The Arabians, on the other hand, bowed down to Andre Russell’s belligerence in the tournament openers. With a few big names in their side, the Arabians will be up for redemption.

The pitch has been an excellent one for batting with scores over 100 being churned out more often than not. But the bowlers have been able to build pressure on the batters as well. The last two games were won by the team, batting first. Hence it can be a tricky decision after the toss.

The temperature will start at 31 degree Celsius and will come down to 26 degrees Celsius by the close of play. There are no chances of rain, though there will be a bit of cloud around. The humidity will start in the 20s and will only go up with the progression of the day.

George Munsey had a horrendous outing against the Qalandars and he will be desperate to make amends. Sam Billings has looked out of sorts as well thus far. Andre Russell couldn’t replicate his heroics from the match versus the Arabians. Russell has three wickets to his name at an economy of 7.50. Rayad Emrit, Chris Wood and Nuwan Pradeep have a couple of scalps each to their name.

Corey Anderson scored a 22-ball 43 last time, but have injured his shoulder. If he doesn’t play then Alex Davies may get a chance. Niroshan Dickwella has looked in great rhythm. In bowling, Luke Wright and Moeen Ali need to come to the party. Marchant de Lange picked up a couple of wickets. Harry Gurney and Rohan Mustafa didn’t get wickets, but had economy of 7 and 7.5 respectively.

The prediction is for Northern Warriors to win the match. 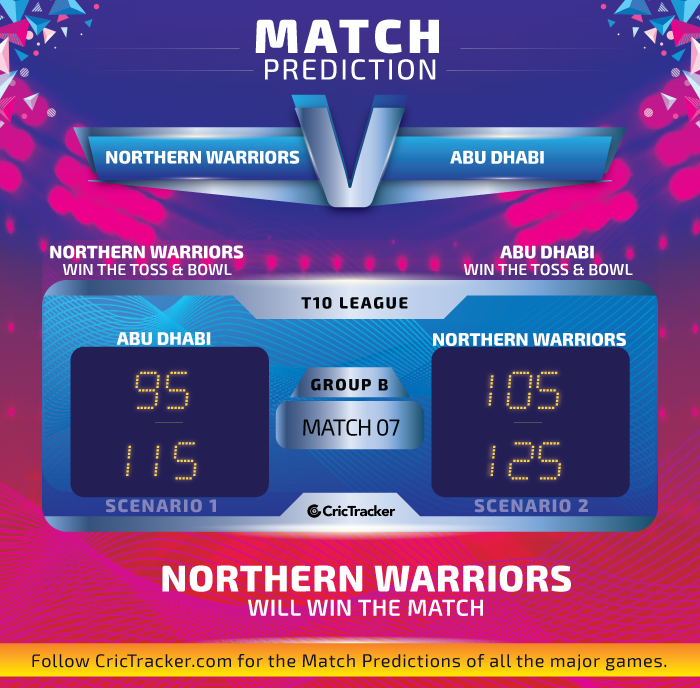 Colin Ingram and Rilee Russouw played freely and got the Tigers off to a blistering start. Andre Fletcher missed out at the top of the order. Tom Moores and Thisara Perera are also capable of playing the outrageous strokes. Frylinck and Wiese can also wield the willow to good effect. Both were excellent with the ball. Plunkett and Qais Ahmed are more than handy with the ball in hand.

Upul Tharanga got a 22-ball 48 for the Tuskers at the top of the order. The southpaw got the apt support from Shafiqullah Shafaq, who flayed the Bulls bowling for a 21-ball 34. Ahmed Raza was exceptional with the ball, giving away only 11 runs and picking up a couple of wickets as well. Shapoor Zadran was hard to get away as well. Brown and Rimmington were also among the wickets.

The prediction is for Bangla Tigers to win the match. 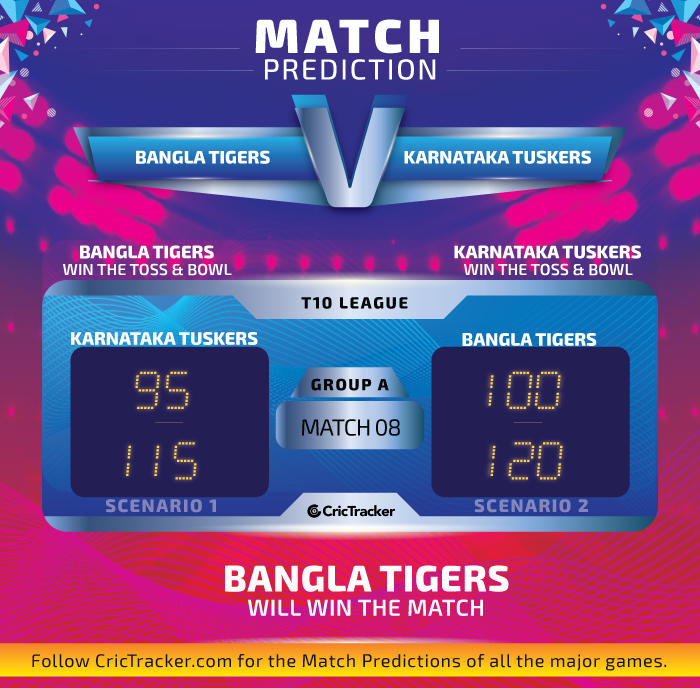 Dasun Shanaka was the standout batter for the Arabians last time around. He got an unbeaten 37 off 19 balls. Chadwick Walton and James Fuller got starts, but failed to carry on. Yuvraj Singh and Chris Lynn will wish to make amends after scoring in the single digits last time around. Maratha’s bowling was disappointing. Dwayne Bravo got one wicket and all of them had an economy in excess of 10.

Tom Banton has scored 69 runs at a strike-rate of 186.48 and has looked in great rhythm. Dawid Malan failed the other night, but is a class act without a doubt. Luke Ronchi needs to up his scoring rate a wee bit from his rate of 123.33. Clark, Jordan and Salt can hit the long ball as well. Prasanna has been excellent with an economy of 3.33. Kumara, Garton and Jordan have also delivered.

The prediction is for the Maratha Arabians to win the match. 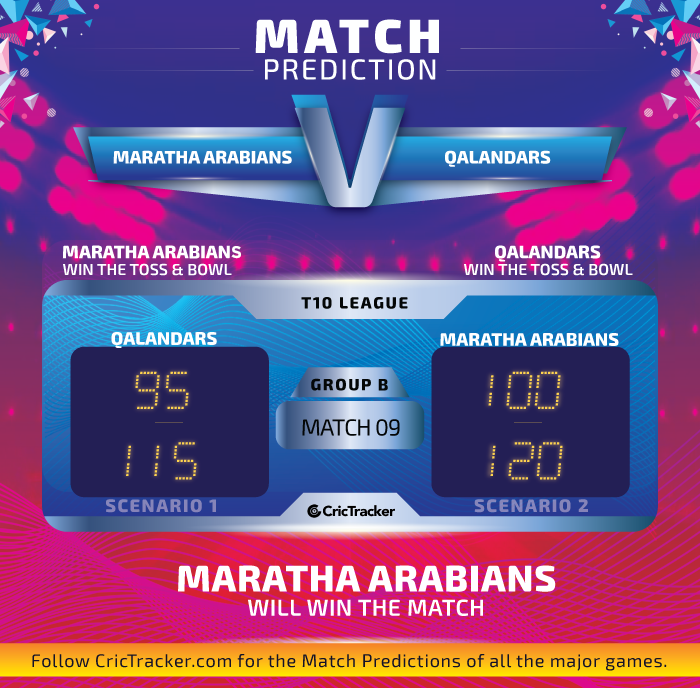