Andre Russell is an absolute game-changer in this format of the game. He does a good job with the bat as well as the bat.

The 6th Match of the T10 League 2019 will be played between the Northern Warriors and Qalandars at the Sheikh Zayed Stadium in Abu Dhabi.

The Northern Warriors started off the new season with a fine victory against the Northern Warriors. As expected, Andre Russell starred for them both with the bat as well as the ball. Thus, it was quite a cakewalk for them and they managed to win that game by a 9-wicket margin. In their upcoming fixture, the Warriors are set to take on the Qalandars which is another strong side.

They played some great cricket in their first game of the tournament. However, the team failed to get over the line as this high-intensity match finished in a draw. When they take the field on Saturday, they’d fancy getting over the line at least this time and adding a few points to their tally.

As the night progresses, the humidity levels will increase. This will possibly quicken the pitch and the ball should come onto the bat nicely.

This is one of those formats where the batsmen will look to swing at everything. The Abu Dhabi pitch has usually yielded high scoring games. However, there have been occasions when the teams didn’t assess the situations well enough and got bundled out for low scores.

Lendl Simmons will not be available for the upcoming encounter.

In the batting department, Tom Banton, Dawid Malan and George Munsey must be in your Dream11 Fantasy team. You can’t avoid Andre Russell as well. Chris Wood and Lahiru Kumara are your top picks from the bowling department. 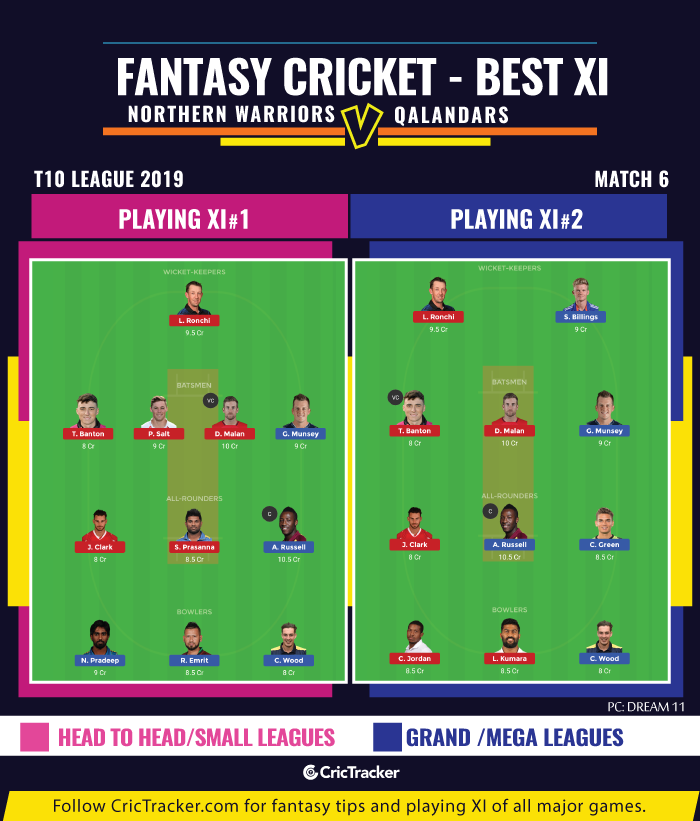 Andre Russell is an absolute game-changer in this format of the game. He does a good job with the bat as well as the bat. Thus, it’d be great to have him as the multiplier in both your Dream11 Fantasy teams.

Northern Warriors are predicted to win this game.