Sandeep Lamichhane is a great option to have in the bowling department.

The 8th Match of the T10 League 2019 will be played between the Bangla Tigers and Karnataka Tuskers at the Sheikh Zayed Stadium in Abu Dhabi.

The Bangla Tigers, who will start their campaign on Saturday, will be back again on Sunday to play Match 8. For this game, their opponents will be the Karnataka Tuskers – another team which will start its proceedings on Saturday itself. Without any doubts, this is one of the most exciting formats ever.

Both these sides feature some big hitters of the cricket ball. Thus, they will be looking forward to making an impact when they play this match. Toss might play a crucial role given the format of the game in this tournament. But with the quality of players they’ve got, these sides will back themselves even if they will have to bat first.

The temperature which is predicted to be around 28 Degrees Celsius at the start of this game will fall to around 26C in the next couple of hours. However, that shouldn’t really make much of a difference. The humidity levels tend to increase during the night.

In the first three games that were played in this edition of the T10 League, the track seemed to be a great one for the batsmen. Out of the six innings in three games, teams managed to go past 100 in four innings. In one of the innings, a team couldn’t hit the triple-figure mark as they chased down the target.

Evin Lewis, Fabian Allen and Kesrick Williams will not be available for this game.

Colin Ingram and Upul Tharanga have performed well in whatever opportunities they had so far. Thisara Perera is another top pick for your Dream11 Fantasy team. Sandeep Lamichhane is also worth consideration. 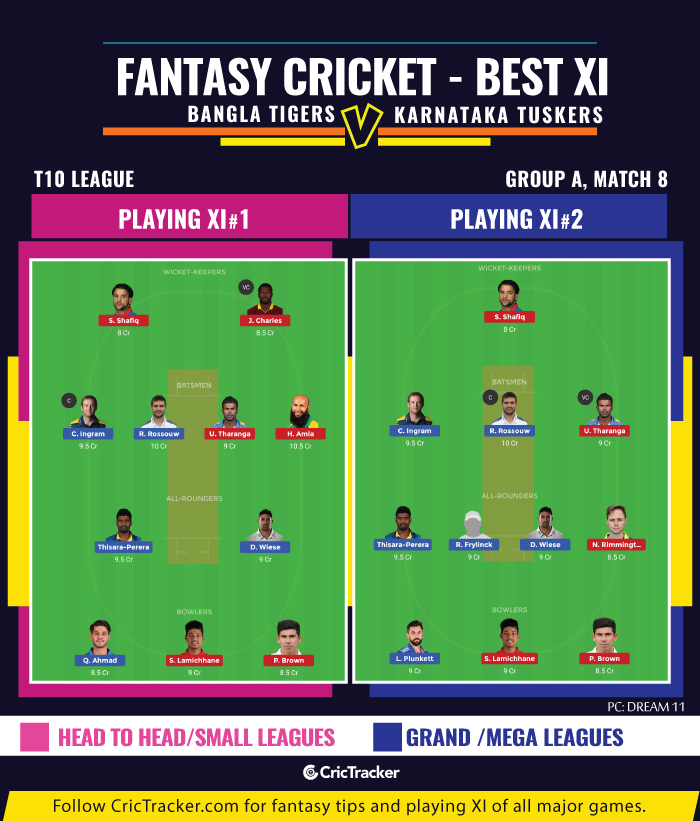 All Shafiqullah Shafiq, Johnson Charles and Andre Fletcher bat higher up the order compared to Tom Moores. It is better to pick your keepers amongst them for your Dream11 Fantasy team.

Karnataka Tuskers are predicted to win the match.