Matty Potts has picked up 7 wickets in as many games. He can be a great pick for your 11Wickets fantasy side.

Durham will take on Yorkshire in a North Group match of T20 Blast 2020, which is set to be a very crucial game for both the sides. The match is going to be played at Headingley, Leeds.

Chances of getting a place in quarter-finals are slim for both Yorkshire and Durham. However, a win on Wednesday might change the complexion of things in the blink of an eye. Both Durham and Yorkshire have won two of their first seven games.

From now onwards, every game is practically a knock-out encounter for them. This sets up for what could be a very enthralling and enjoyable game to watch. A win from either side will help a long way in cementing their stay in the third position.

Leeds will not particularly be very bright and sunny on Wednesday, with temperature ranging between 10-17 °C. Thankfully, there are very fewer chances of precipitation.

Headingley has proved to be a belter in the ongoing season of T20 Blast. Anything under 180 might be considered below par in this ground. However, toss is expected to play a big role as chasing teams struggle a lot in Leeds.

A few players in the Yorkshire camp have undergone the COVID-19 testing, which includes all-rounder David Willey. Yorkshire have not publicly shared the outcome of the tests. Dawid Malan is available after England national team released him early.

Graham Clark has scored 220 runs from 6 games, around half of which came from two half-centuries. He has a fiery strike rate of over 180 and an average of over 35.

The backbone of Durham’s batting unit, Alex Lees has scored 256 runs so far, which includes three half-centuries. He has an average of over 50.

Dawid Malan has played only one game in this year’s T20 Blast, in which he scored 27 runs. His position in ICC’s T20I batsmen ranking is a testament to his exceptional capabilities.

Adam Lyth has scored 241 runs in 5 games. He has an average of nearly 50 and a strike rate almost 170. He also has a wicket to his name. He must be present in your 11Wickets fantasy side.

Youngster Harry Brook has scored 117 runs in 5 innings. He has maintained a strike rate of over 140, with his average being over 20. He has also picked up a solitary wicket. 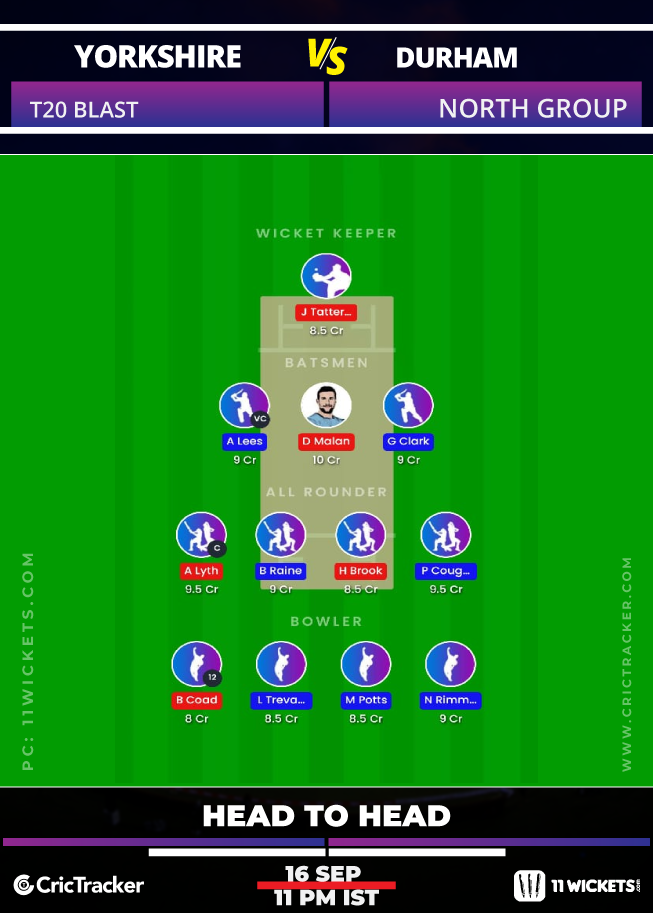 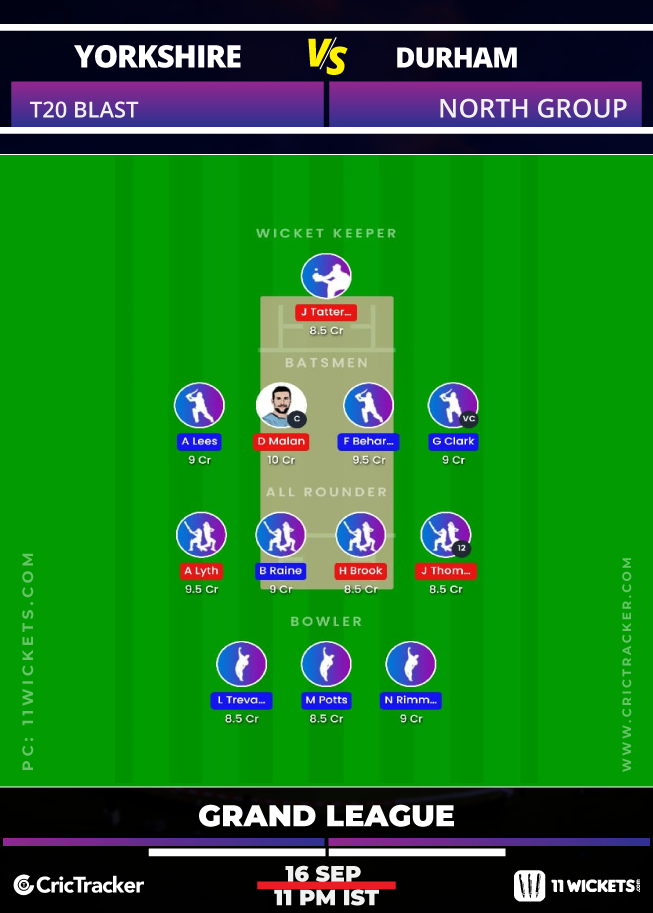 Matty Potts has picked up 7 wickets in as many games. He can be a great pick for your 11Wickets fantasy side.

Durham is expected to win this match.