Matthew Quinn has been brilliant for Essex. He can be a great pick for your 11Wickets fantasy team.

The South group match of the T20 Blast 2020 will be played between Kent and Essex at St Lawrence Ground, Canterbury.

The two sides who will meet at Canterbury on Friday will go into this game with different intentions. For Kent, the target will be to snatch the pole position of South Group. They are currently sitting in the second place, just a couple of points away from table-toppers Surrey.

On the other hand, it will be a battle of survival for Essex. They had a horrendous start to their campaign, failing to win any of their first six games. But just when people started to write them off, they pulled some sort of a comeback by winning two consecutive games.

We are all set for a great game of cricket with no interruptions, as the chances of precipitation are as good as nil. The temperature is expected to be around 19 °C.

The pitch at the St Lawrence ground has been fairly neutral so far, with good assistance for both the batsmen and the bowlers. Anything around 170 can be considered as a good score on this ground.

Sam Billings and Tim Groenewald are available for selection for Kent.

Daniel Bell-Drummond has been on fire for Kent this season. He has scored 358 runs so far, which includes three half-centuries. He has an average of over 50.

Zak Crawley has amassed 305 runs so far, at an incredible average of over 50. He also has a fiery strike rate of over 165. He is a must-have for your 11Wickets fantasy team.

Joe Denly has been instrumental with both the bat and the ball. He has scored 84 runs from 3 games, at an average of 28. He also has picked up a couple of wickets.

Daniel Lawrence has ticked all boxes of Essex. He has scored 187 runs at an average of over 30 and has also picked 4 wickets with his economy rate being 8 runs per over.

Ryan ten Doeschate has amassed 203 runs so far. The Dutch’s strike rate of over 130 is decent, but his average of over 50 can be considered as outstanding. 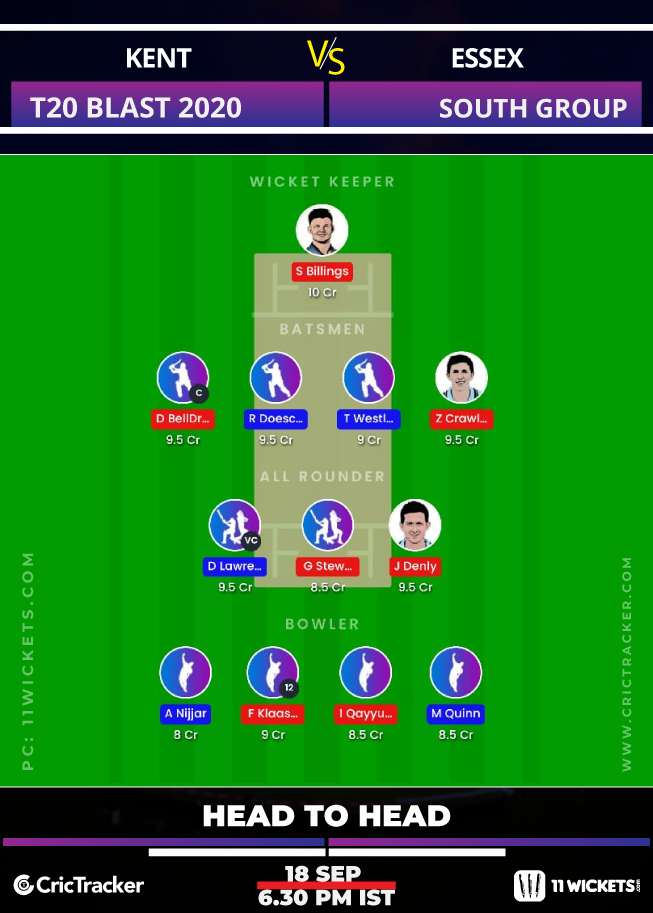 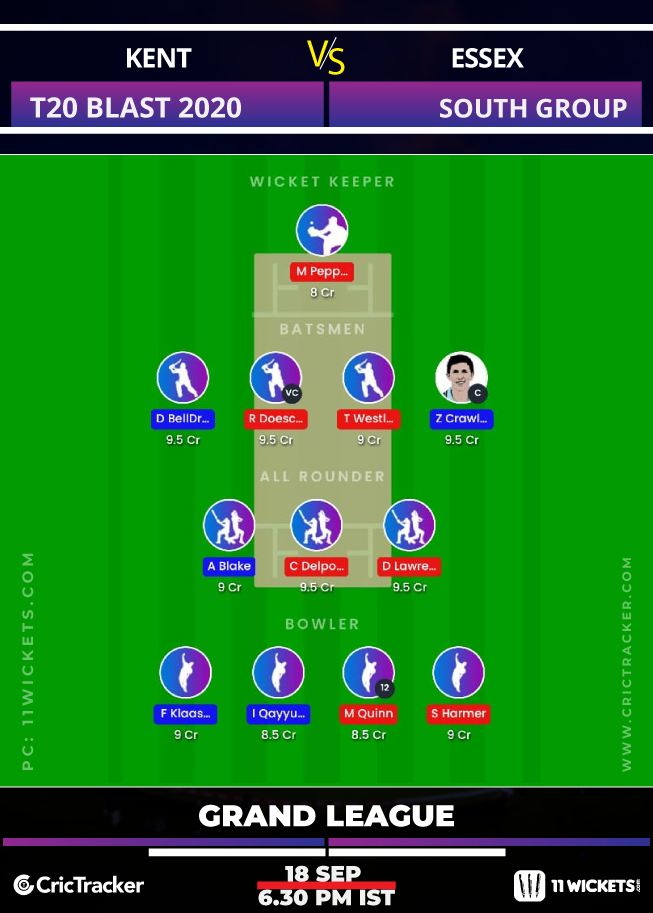 Matthew Quinn has been brilliant for Essex. He has picked up 9 wickets and has conceded runs at an economy rate of fewer than 8 runs per over. He can be a great pick for your 11Wickets fantasy team.

Kent are expected to win this match.