Surrey topped their group after winning ten matches during the group stages.

After the group stage of the 2022 T20 Blast is done and dusted, the remaining eight teams will take on each other during the quarter-final encounters of the edition. The first quarter-final will be played between Surrey and Yorkshire at the Kennington Oval, London on July 6 (Wednesday).

While Surrey topped the South group after winning ten out of the 14 matches they played during the group stages, Yorkshire managed to qualify for the knockout game after winning just seven out of the 14 matches they played. To note, Yorkshire and Nottinghamshire had won the same amount of matches, but Yorks got the edge over Notts due to their good net run rate.

A good batting track is expected during the first knockout game of the 2022 T20 Blast. The venue witnessed several high-scoring games during the group stage matches with skippers generally opting to bowl first after winning the toss. Both teams have some of the cleanest ball-strikers in their team and it is expected to be a good competition between two strong-looking teams.

Probable the best batter of the match

Senior batter Adam Lyth has been in good touch for his team Yorkshire in the current edition. Lyth has stroked a total of 518 runs in just 14 matches at an average of almost 40. He is also playing at an excellent strike rate of 178.01 and is currently placed fourth in the most runs list.

Probable the best bowler of the match

The skipper of the Surrey side and death over specialist Chris Jordan has proved himself on the international stage as well. The right-arm pacer can nail the yorkers during the death overs and can also bowl a deceptive slower delivery. He will be looking to get some vital wickets for his side in the upcoming fixture. 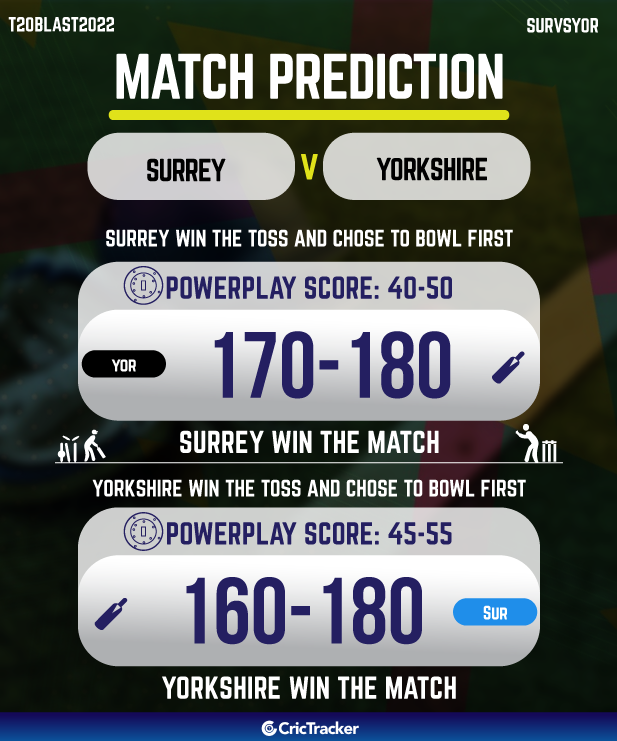