Sujit Nayak has scored 25+ runs and two wickets in both matches in this tournament.

NaMo Bandra Blasters await their maiden win of the season having lost both of their matches by not so big margins. They went down to the Arcs Andheri in their first game defending a total of 176/3. Andheri chased down the target on the final ball of the game losing five wickets. Bandra lost to North Mumbai Panthers in the second match by 27 runs as they were five down for only 24 runs on the board chasing 176 to win.

The Bandra Blasters will take on the Shivaji Park Lions who are also awaiting their first win of the tournament. The runners-up from the previous season began the 2019 campaign three days after the start of the 2nd edition of the T20 Mumbai League. A not so great show with the bat saw Shivaji Park finish with 159/6. Arcs Andheri chased down the target in the final over for the loss of five wickets.

The 12th match of the T20 Mumbai League 2019 will be played between Shivaji Park Lions and NaMo Bandra Blasters at the Wankhede Stadium in Mumbai.

Big totals during the night matches have been recorded in alternative days. The teams have had good success while chasing despite batting on a pitch already used for the afternoon game.

Sujit Nayak has been brilliant in all departments so far. He began with a 21-ball 50 and followed it with 27-ball 29 in the next game. In both the matches, Sujit claimed two wickets apiece. He could be crucial for the Bandra Blasters to succeed in this tournament.

Sujit Nayak has been the top performer for the Bandra franchise in this tournament. Shivam Dube had a very ordinary game but ended up fetching 33 points. Shreyas Iyer turned out to be decent with the ball taking two wickets. 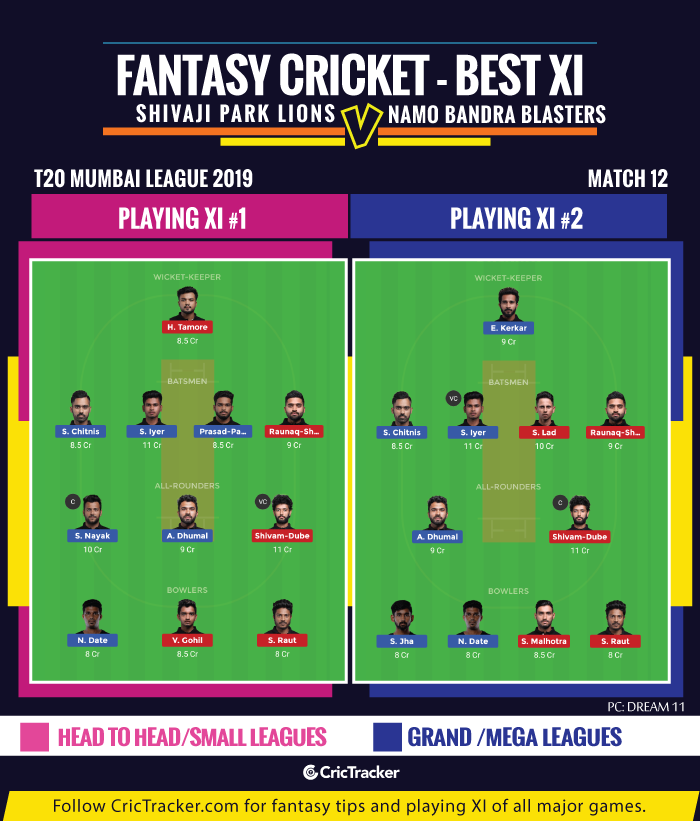 This match includes Shreyas Iyer and Shivam Dube who come at 11 credits and the likes of Sujit Nayak and Siddhesh Lad at 10 credits. Iyer’s batting form is a concern but he might be bowling a few overs like in the last match. Lad can be excluded given his batting position. Both Sujit and Shivam are crucial as the duo make an impact with both bat and ball.

NaMo Bandra Blasters are expected to bring an end to their losing spree and open their points tally.