The Lions and the Blasters are the only two sides who are yet to register a win in the eight-team tournament.

Shivaji Park Lions and NaMo Bandra Blasters will be desperate to open their accounts in the ongoing season of T20 Mumbai League when they lock horns in the second match of Sunday’s doubleheader. Both the teams have made pretty much similar starts as they are still winless. While the Blasters are languishing at the bottom of the points table with two losses in as many games, the Lions are seventh after losing their tournament-opener. The Lions and the Blasters are the only two sides who are yet to register a win in the eight-team tournament.

In their last outing, Shivaji Park Lions Lions had lost to ARCS Andheri by four wickets. Asked to bat first, they ended up scoring a modest total of 159 for 6. At one stage, they were reeling at 86 for 5 before Raunaq Sharma’s unbeaten fifty gave the bowlers something to bowl at. The bowlers did well to make a contest out of the game but Lions ended up on the losing side. For Andheri, their skipper Akhil Herwadkar scored an unbeaten 79 to take his side home.

On the other hand, NaMo Bandra Blasters lost their last game to North Mumbai Panthers by 27 runs. Panthers’ openers – Prithvi Shaw and Vikrant Auti – scored fine fifties to help their side pile up 175 for 8. In reply, Blasters were reeling at 24 for 5 before Siddharth Chitnis’ fifty and some handy contributions from lower-order batsmen guided the team to a respectable 148 for 7.

So far, most of the teams have scored more than 150 runs on the Wankhede Pitch. One can expect the same when these two in-form teams lock horns against each other on Sunday.

There will be no interruptions from nature whatsoever as there are no predictions of rain. The temperature will be around 30-31 degree Celsius when the teams will take the field and is unlikely to change much for the next few hours. Humidity, however, can make things tough for the players and others as it will be hover between 60-75% during the game.

The Lions can bring in Arun Yadav to replace Shivam Malhotra who had conceded 38 runs in his four overs. Barring that, they are unlikely to make any other change to the team that lost the game against Andheri. Blasters, on the other hand, are likely to drop Atul Singh to make way for Karsh Kothari after the former conceded 39 runs from his three overs.

Prediction is for the team batting second to win the match. 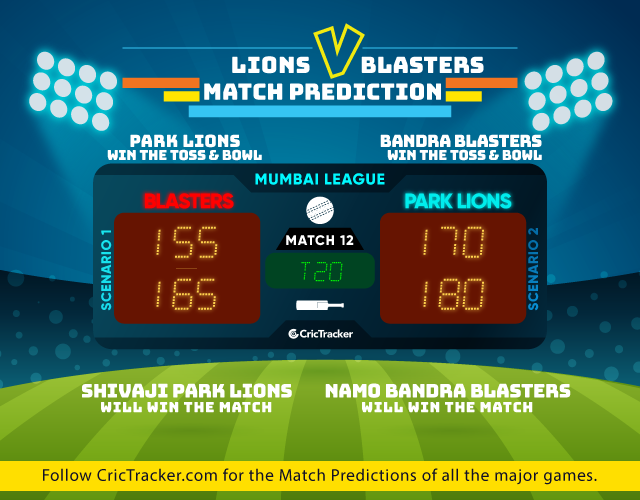