Aakarshit Gomel has scored 30+ in all the three matches in this tournament.

North Mumbai Panthers began the 2019 T20 Mumbai with two big wins before going down against the Arcs Andheri during the previous match which went down to the last over. They edged past the Eagle Thane Strikers in their opening game and followed it with a thumping 27-run win over the NaMo Bandra Blasters. The Mumbai Panthers would have made it three wins in a row if not for a 114-run 4th wicket partnership that came off only 62 balls for Andheri.

They will now take on the debutant team Aakash Tigers MWS who won only one of the three matches they played. Aakash Tigers began the season by upsetting the defending champions Triumph Knights before losing two close matches. Eagle Thane Strikers chased down their total of 136/8 with five balls to spare while SoBo Supersonics restricted them to 133/7 while defending the total of 143. Aakarshit Gomel has been their top performer with three 30+ scores.

The 13th match of the T20 Mumbai League 2019 will be played between Aakash Tigers MWS and North Mumbai Panthers at the Wankhede Stadium in Mumbai.

The afternoon matches played on the weekend witnessed a bit of slowness from the pitch. On Saturday, the Triumph Knights defended their total of 162 by restricting the Thane Strikers to just 124. Arcs Andheri chased down 161 on Sunday against North Mumbai in a last over thriller.

Kaustubh Pawar managed to score 20+ runs in each of the three innings he batted in this tournament. Pawar lacking in converting the starts has affected the batting performance of Aakash Tigers. Kaustubh needs to bat as long as possible as his experience in the middle overs will help a team with young talents.

Aakarshit Gomel and Prithiv Shaw bring consistency at the top. Atif Attarwala can be a worthy pick as a multiplier due to his all-round consistency. Arjun Tendulkar can be risked as captain with him being the opener. 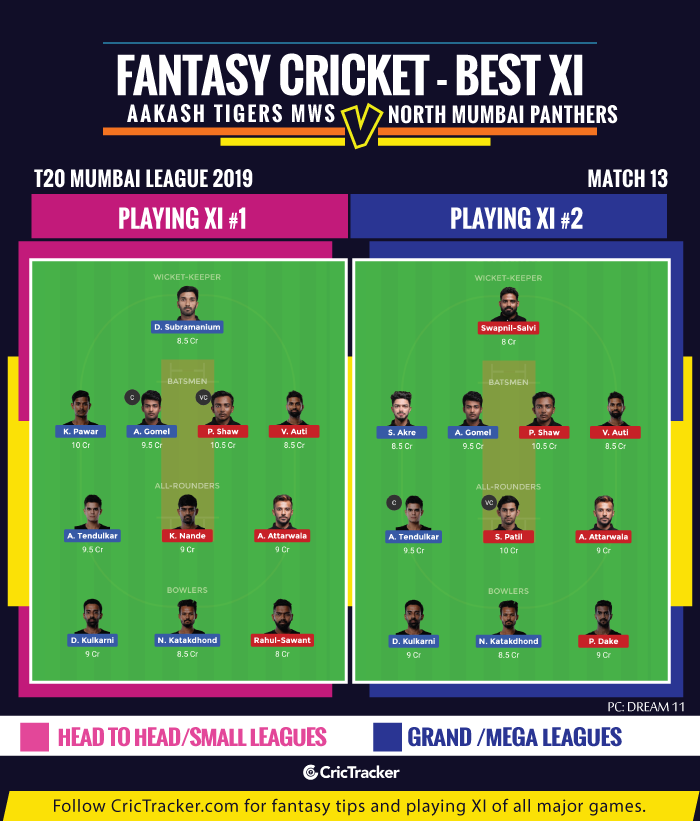 Arjun Tendulkar opening the innings makes him a crucial pick in the all-rounders category. Arjun has been permitted to quick-fire starts with the bat but Aakash Tigers have tried to bring the best out of the all-rounder. Atif Attarwala has been quite consistent and is the safest option in this category. One of Karan Nande, Shams Mulani and Sairaj Patil can be the third pick among all-rounders.

The Aakash Tigers will be hopeful about bringing an end to their losing spree of close games.