The Lions have to win this match after losing two on the bounce.

Shivaji Park Lions will be desperately seeking to open their campaign in the ongoing season of T20 Mumbai League when they lock horns with Triumph Knights MWE. The Lions have started their season with two back-to-back losses and another loss could very well spell doom for them. Knights, on the other hand, had started their season with two defeats too but opened their account on Saturday.

In their last outing, the Lions suffered a close three-run loss to NaMo Bandra Blasters. Bowling first, the Lions managed to restrict the Blasters to 152 for 4. However, they could not chase down the total and fell short by three runs as they finished on 149 for 6. Left-handed batsman Shivam Dube tried his best and scored an unbeaten 87 but the lack of support from the other end saw his effort go in vain.

The Knights, nonetheless, thrashed Eagle Thane Strikers by 38 runs to open their account this year. It was a pretty clinical show from the Suryakumar Yadav-led side as they put up a thorough team performance to register a much-needed win. Asked to bat first, the Knights scored 162 for 7. The bowlers then did a fine job by restricting Strikers to 124 for 9.

While traditionally the Wankhede has always been a high-scoring venue, the ongoing league has not witnessed such a trend so far. Teams have been scoring something around 150 or 10-20 odds runs above it. So one can expect the same scores when these two teams lock horns on Monday.

There are absolutely no chances of rain as per the weather report. The temperature will hover between 30-32 Degrees Celsius while the humidity will be between 65-75%.

Both the teams are unlikely to change their playing XIs for the forthcoming crunch clash. While Lions are on a losing streak, they lost their last game by just three runs and are likely to stick with the same playing eleven. The Knights, on the other hand, are also likely to field the same eleven that helped them win their last game.

The prediction is for the chasing team to come up trumps. 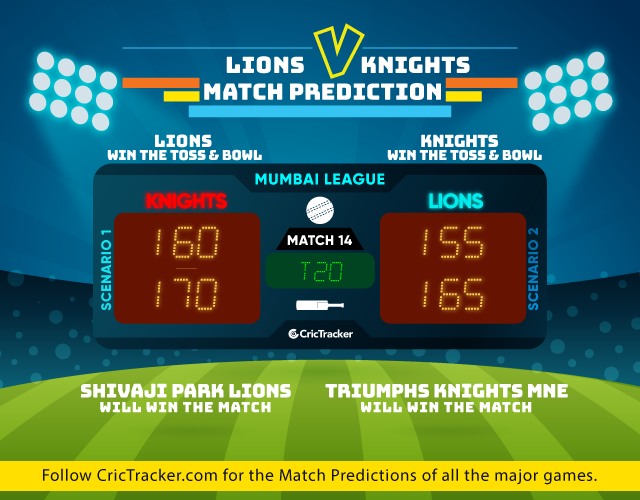