Aditya Tare earned 40+ points in three out of four matches.

NaMo Bandra Blasters bounced back after early defeats but stand no chance of making it to the semi-finals. The Bandra team lost their first two games and won their next two and are placed at 3rd in Group B. SoBo Supersonics and Arcs Andheri won four out of their five matches and sealed their spots in the final four. They will be now up against the struggling Group A side, Eagle Thane Strikers.

The Thane Strikers have an outside chance of finishing in final four with results helping their cause. Triumphs Knights MNE and North Mumbai Panthers take on each other with the winner getting a direct ticket for the semis. The Thane team has to ensure they beat the Bandra team by a huge margin and hope that the Aakash Tigers MWS lose against the Shivaji Park Lions in the last league encounter.

The 19th match of the T20 Mumbai League 2019 will be played between NaMo Bandra Blasters and Eagle Thane Strikers at the Wankhede Stadium in Mumbai.

The game between Bandra and Thane will be the last afternoon game of the tournament. Across the nine games in this season, most of them produced 150+ totals.

Aditya Tare has three games with 40+ points while Sujit Nayak’s least has been 24. The duo will be ideal and safest for the multipliers. 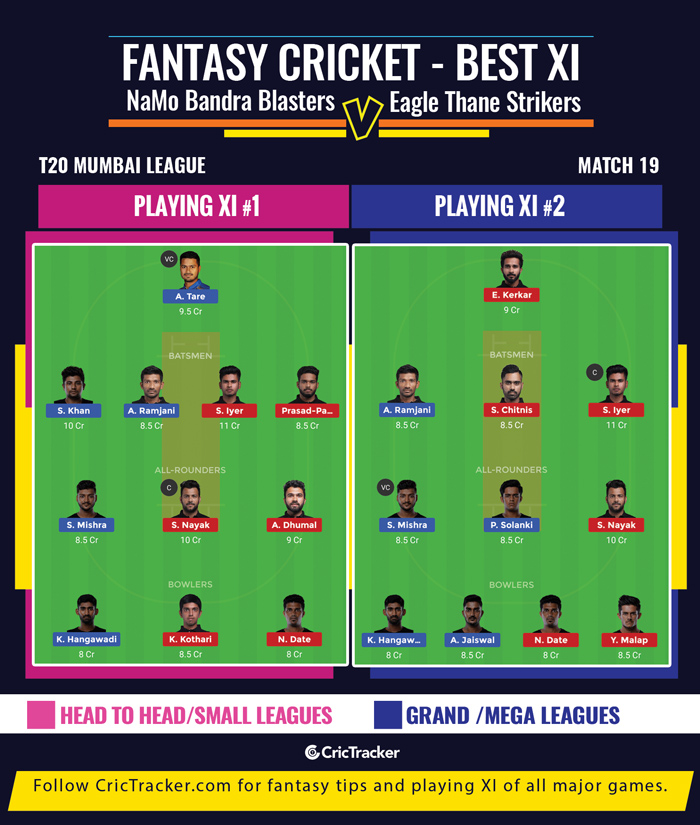 Both Shreyas Iyer and Sarfaraz Khan can be fitted in the playing XI for this game despite them costing 11 and 10 credits respectively. However, some of the consistent players in the batsmen category might miss in this process. Shreyas hasn’t made a mark with the bat this season while Sarfaraz scored a fifty when he batted early due to a top-order collapse.