Parag Khanapurkar scored 96 for 49 balls for Sobo Supersonics in the first game.

The defending champions Triumph Knights MNE got started in season two of Mumbai T20 with a loss against the new entrants Akash Tigers MWS in the opening game of the tournament. Their skipper Suryakumar Yadav’s unbeaten 90 was the only take away from that game which didn’t go in their way. They will now take on the SoBo Supersonics in the second game as they search for their first win of this season.

The SoBo Supersonics made a perfect start to the campaign by defeating the Andheri Arcs by a huge 48-run margin on the opening day. Parag Khanapurkar struck a 49-ball 96 by smashing ten fours and five sixes. He was run out in the final over trying to get back on strike to finish his hundred. The experience of Rohan Raje helped Supersonics as Raje took 2/8 in his three overs.

The 5th match of the T20 Mumbai League 2019 will be played between Triumphs Knights MNE and Sobo Supersonics at the Wankhede Stadium in Mumbai.

The first two days of the tournament gave a brief idea about how the tournament will progress. The batsmen enjoyed during the day in dry conditions. A target of 148 was easily chased on day one while a total of 374 runs were aggregated on the second day.

Suryakumar Yadav started the 2019 edition of the T20 Mumbai League from where he left it in 2018. He scored an unbeaten 90 off 56 balls smashing seven maximums and four fours against Aakash Tigers while no other batsmen got to 15. During 2018 final, Surya scored exactly 90* in only 42 deliveries with the help of seven fours and seven sixes. In that game, his knock helped Triumph Knights finish on 182/5 from 34/5 to win the title.

Suryakumar Yadav is a direct choice as captain or vice-captain given his recent form and success in T20 Mumbai. The opposition captain Jay Bista is another name that could do justice to multipliers. Bista also gets a couple of overs with the ball. 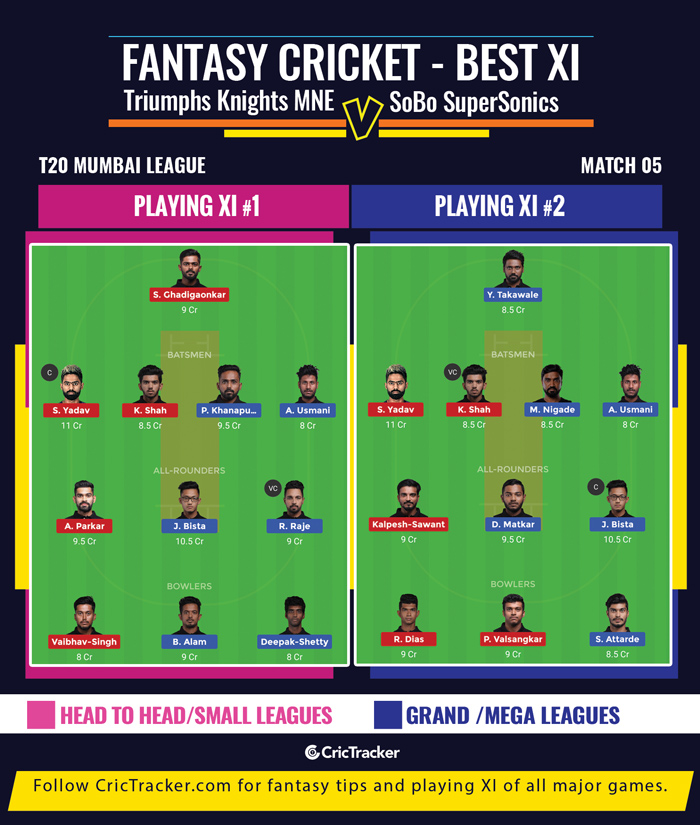 If all the three Jay Bista, Aakash Parkar and Rohan Raje are picked in the XI, only one bowler with 8.5 or more credits can be selected as the all-round trio collectively costs 29 credits.

The defending champions Triumph Knights are expected to open their points tally on Thursday.