Arjun Tendulkar scored 23 runs and took a wicket on his T20 Mumbai debut.

The two new teams of the T20 Mumbai League, Eagle Thane Strikers and Aakash Tigers MWS will face off on Thursday night. Aakash Tigers kick-started their campaign with a comfortable win over the defending champions Triumph Knight in the tournament opener. Their biggest pick at the auction, Arjun Tendulkar did make a good start with both bat and ball in the T20 Mumbai.

Arjun picked up a wicket with the new ball and scored 23 batting at No.3 during the chase. On the other hand, Eagle Thane Strikers fell six runs short of North Mumbai Panthers’ total in their first game of the league. Aditya Tare’s valiant effort of 44-ball 71 was the highlight of the chase while Sarfaraz Khan’s return to Mumbai turned tad disappointing as the youngster got out trying his special scoop shot.

The 6th match of the T20 Mumbai League 2019 will be played between Eagle Thane Strikers and Aakash Tigers MWS at the Wankhede Stadium in Mumbai.

The matches in the night are played on the pitch used for the afternoon games but the nature of the pitch hardly got affected. A total of 175 is a bare minimum to win while batting first under the lights.

Akash Parkar got out only once in three innings during the 2018 T20 Mumbai scoring 145 runs at a SR of 198.63. He also picked up three wickets in that tournament at an average of 32.25. Parkar didn’t have a great first outing but can come back strongly.

Aditya Tare batting in the top three increases his chances of being among the top performers. Arjun Tendulkar bowls with the new ball and could be the MVP if he continues to bat at No.3 like in the first match. Sarfaraz Khan did bowl in the previous game and picked up a wicket. Kaustubh Pawar is another name to look out for while selecting the multipliers. 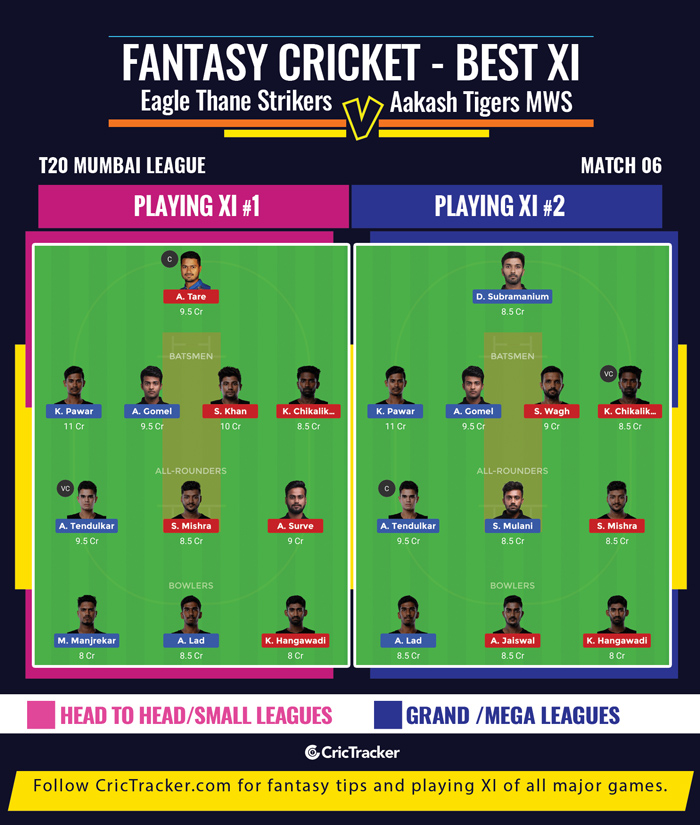 The likes of Aditya Tare, Arjun Tendulkar, Kaustubh Pawar, Sarfaraz Khan and Aakarshit Gomel are the key players from both the sides from this game. The five players collectively eat up 49.5 credits which means only one of the remaining six can be 9 credits.

Aakash Tigers MWS might face a tough fight from Eagle Thane Strikers in their bid to register the 2nd straight win.