Parag Khanapurkar earned at least 25 points in all the five matches in the league phase.

The Aakash Tigers MWS cruised to the semi-finals of T20 Mumbai League with two timely victories at the end of the league stage. They finished at the second position in the Group B edging past Eagle Thane Strikers and Triumphs Knights MNE. Thane came up with a superlative effort to boost their NRR on the last day. However, Aakash Tigers cruised through to a comfortable victory against Shivaji Park Lions in the last league match to seal their berth.

They will face the Group B toppers SoBo Supersonics in the knockout fixture on Saturday. The Supersonics won their first three games with which they confirmed a top-two finish from their Group. The Jay Bista-led side got better of the Aakash Tigers in the league phase meeting. The Supersonics were successful in defending their total of 133 as the debutant team Aakash Tigers made only 133/7.

The 2nd semi-final of the T20 Mumbai League 2019 will be played between Sobo Supersonics and Aakash Tigers MWS at the Wankhede Stadium in Mumbai.

The pitch used for the first semi-final looked slightly better compared to the last few night games. The second semis could be played on an even better track. Anything over 150 is defendable going by the trend of the tournament.

Among the five matches, the lowest number of points that Parag Khanapurkar earned is 25. He is a certain pick as captain or vice-captain. The other all-rounders Arjun Tendulkar, Shams Mulani and Rohan Raje are also qualified to be picked as multipliers. 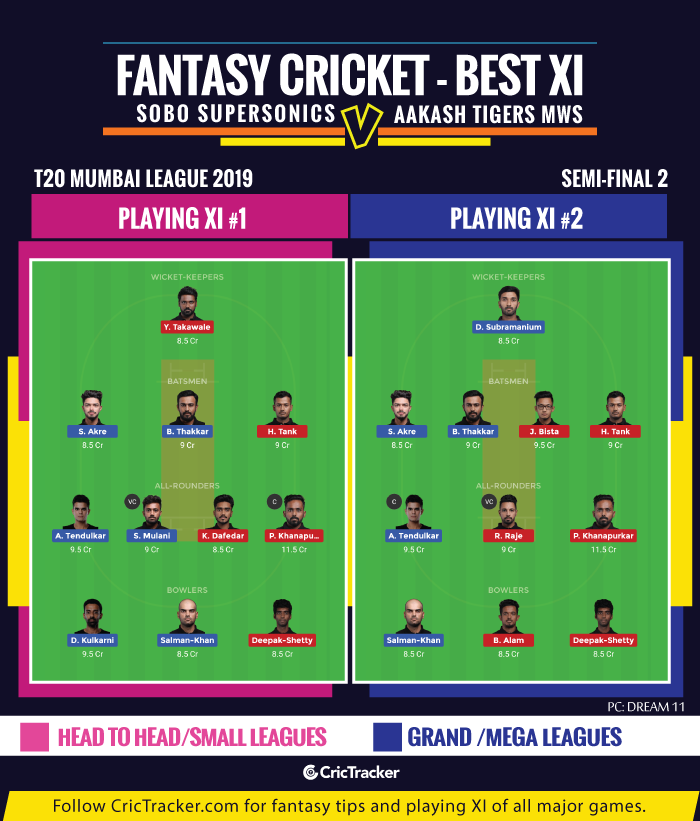 The extension of maximum limit in the all-rounders’ category to four players helps one pick up Parag Khanapurkar, Arjun Tendulkar, Shams Mulani and Rohan Raje. Dhrumil Matkar will be a dark horse in this category.

Aakash Tigers MWS are expected to defeat the Sobo Supersonics and make it to the final.