150 has proved to be a part total and both the team winning the toss would want to bat first.

High-flying SoBo SuperSonics will want to continue their red-hot form when they take on Aakash Tigers MWS in the second semi-final of the T20 Mumbai League 2019. SoBo SuperSonics finished the league stage at the top of the points table with a staggering four wins from five matches. The Tigers, on the other hand, qualified as the fourth-ranked team in the table, having won three of their five games.

Both SuperSonics and Tigers have already played against each other and it was a thrilling game. SuperSonics won that game by 10 runs. Batting first, the SuperSonics scored a modest total of 143 for 6. The SuperSonics then came up with a fine bowling performance to restrict the Tigers to 133 for 7. With both the teams entering the semi-final on the back of wins, the upcoming contest can also turn out to be a thrilling contest.

In their last game, SuperSonics thrashed Shivaji Park Lions by 35 runs. Batting first, the Jay Gokul Bista-led side scored 150 for 6 in the stipulated 20 overs. In reply, the Lions had come up with a miserable batting performance. Dhrumil Matkar led the charge with the ball, picking up 3 wickets as SuperSonics bowled out the Lions for a paltry total of 115.

On the other hand, the Tigers also beat the Lions in their last league encounter, registering a thumping seven wicket-win. After restricting the Lions to a modest 127 for 6, the Tigers chased down the total losing just three wickets inside 18 overs to storm into the semi-final.

In the ongoing edition, anything above 150 is looking like a par total. The Tigers, themselves have crossed the 150-run mark just once. Most of the teams have posted totals only in the range of 150-170 and one would not see this game breaking that trend either.

As far as the weather is concerned, there is no reason to worry as there are no predictions of rain. The temperature will be around 30-degree Celsius throughout the match. The humidity will be on the higher side and will be hovering in the higher 70s.

Having won their last league games, either of the two teams is unlikely to alter with the winning combination. Thus one can expect the same playing eleven from both the teams in the semi-final that helped them win their previous encounter and enter the last four.

The prediction is for SoBo SuperSonics to win the match and enter the final. 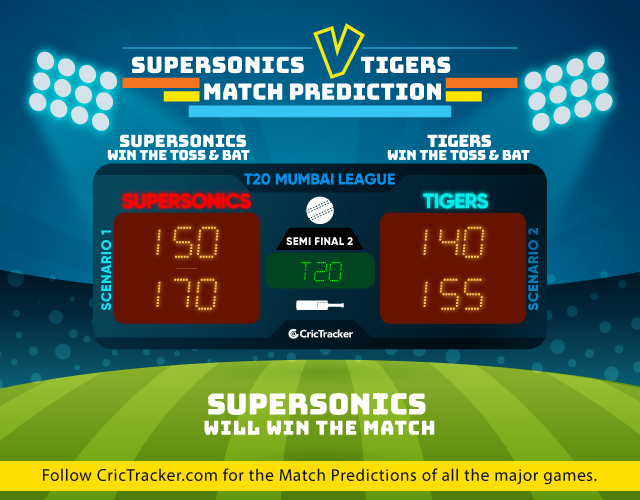