Avishka Fernando was in excellent form in the T20I series against Oman.

Sri Lanka and Namibia are set to lock horns in Match No.4 of the T20 World Cup Qualifiers on Monday, October 18 at the Sheikh Zayed Stadium in Abu Dhabi. The Lankans have had a decent run of form of late. To start with, they defeated Zeeshan Maqsood’s Oman in the two-match ODI series.

Thereafter, they defeated Bangladesh by four wickets in the first warmup game and then defeated PNG by 39 runs. Namibia, on the other hand, lost both their warm-up games to Oman and Scotland respectively. However, they had a decent run of form in the Summer T20 Bash earlier this month.

The pitch in Abu Dhabi has generally been good for batting. But at the international level, the venue has witnessed low-scoring affairs. The track, however, has helped the chasing teams. Batting second should be the way forward.

Sri Lanka and Namibia are yet to face each other in T20Is.

Avishka Fernando generally opens the batting for Sri Lanka in T20Is, but in the games against Oman, he came in the middle-order. However, the change in position didn’t ruffle him by any means. He scored an unbeaten 81 in the first game and also played fluently in the second match. Fernando also played at a strike rate of 150.64.

Lahiru Kumara is known for hitting the back of a length on the consistent basis. He was outstanding in the T20I series against Oman. In the first game, he picked up four wickets to help the Lankans to a victory. In the second game, the fast bowler picked up two wickets. He is expected to play a critical role against Namibia as well. 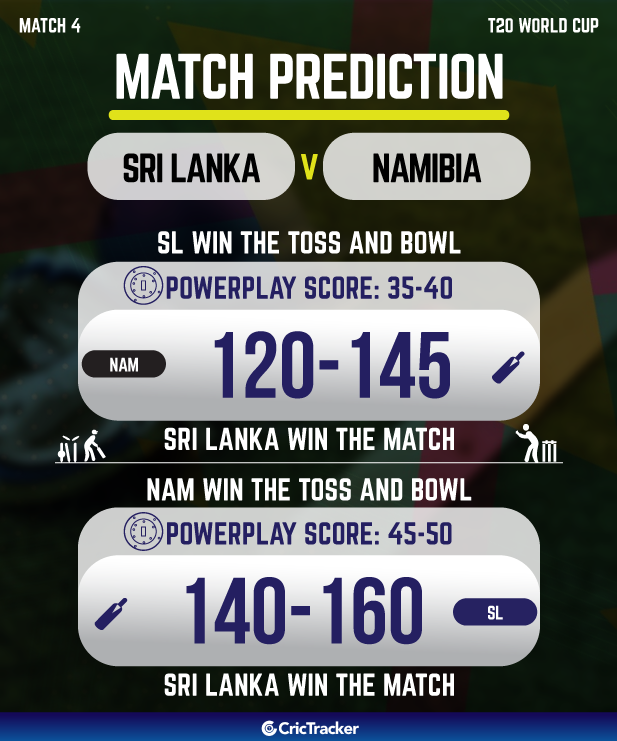