Jatinder Singh is the leading run-scorer of the tournament.

Oman and Scotland are set to lock horns in Match No.10 of the T20 World Cup Qualifiers on Thursday, October 21 at the Al Amerat Cricket Ground (Ministry Turf 1) in Al Amerat. The Kyle Coetzer-led Scotland are on a roll, having won both their matches against Bangladesh and PNG.

But if they lose their next game, they could even face elimination. Although they are placed on top in Group B, their net run rate is pretty close to Oman and Bangladesh. Oman, on the contrary, lost their previous game to the Tigers, but they went down after giving their opponent a run for their money.

The pitch at Al Amerat has been a sporting one for playing cricket over the years. The batters will have their say, but the bowlers won’t return empty-handed. Chasing should be the way forward for teams.

Jatinder Singh has been in incredible form in the ongoing edition of the T20 World Cup. The right-hander is currently the leading run-scorer of the tournament, having scored 113 runs at an average of 113. After scoring a half-century against PNG, he scored 40 against Mahmudullah’s Bangladesh. If Oman to win the next game, Jatinder has to be on top of his game.

Josh Davey has been in incredible form for Scotland in the ongoing edition of the T20 tournament. The right-arm only picked up a solitary wicket against Bangladesh. But the fast bowler came into his own against PNG as he picked up four wickets. His economy rate of 5.60 shows that the opposition batters haven’t been able to score big against him. 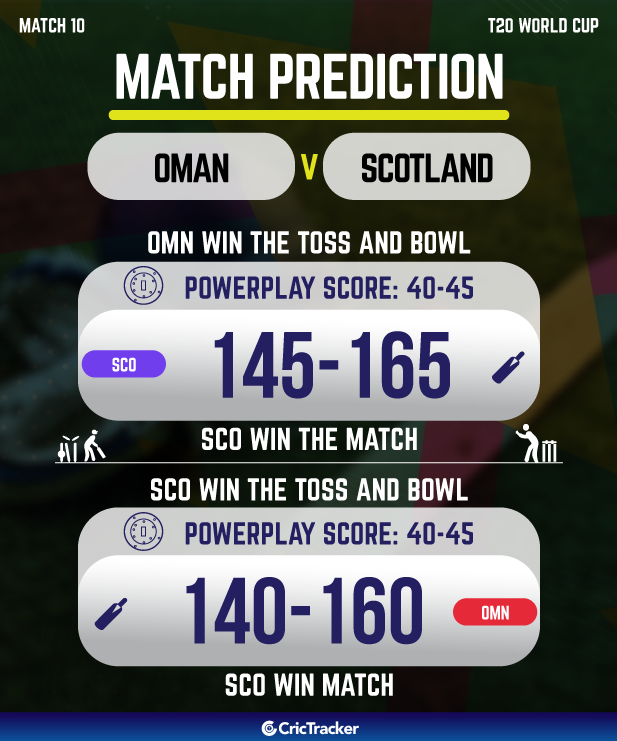