Scotland have lost all their six matches against Afghanistan in the T20 format.

Afghanistan and Scotland are set to cross swords in Match No.17 of the T20 World Cup on Monday, October 25 at the Sharjah Cricket Stadium in Sharjah. The Afghans, led by Mohammad Nabi, started the warmups with a hefty 41-run loss to South Africa after which they defeated the West Indies.

They made a direct qualification to the Super 12s, and will be in for a tough challenge. The Kyle Coetzer-led Scotland, on the other hand, are on a three-match winning streak in the tournament. They began their journey with a six-run win over Bangladesh following which they got the better of Oman and PNG.

The pitch in Sharjah has generally been a bowlers’ paradise. Spinners have mostly dictated terms on the surface. However, Bangladesh’s game against Sri Lanka turned out to be a high-scoring affair. Batting second should be the way forward for both teams.

Richie Berrington has been one of the most prolific run-scorers for Scotland across formats. In 69 T20Is, the right-handed batter has notched 1620 runs at an average of 33.06 and a strike rate of 128.67. He couldn’t score big against Bangladesh, but made impressive comebacks against PNG and Oman. Berrington is someone, who can alter gears as per the match situation.

Rashid Khan has been a prolific run-scorer for Afghanistan ever since he made his debut back in 2015. In 51 T20Is, he has already eked out 95 wickets. His economy rate of 6.21 suggests that he can keep the batters in check. Impeccable line and lengths mean that Rashid has become a globetrotter in the T20 format. Not to forget that Rashid can also play his shots to good effect. 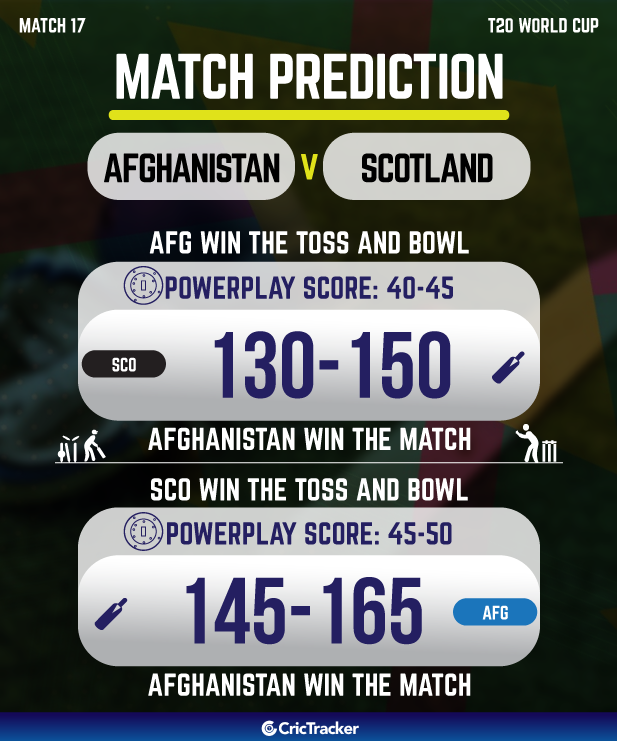