Both teams had contrasting fortunes in their respective opening matches of the Super 12.

England and Bangladesh are set to cross swords in Match No.20 of the T20 World Cup on Wednesday, October 27 at the Sheikh Zayed Stadium in Abu Dhabi. The Three Lions, led by Eoin Morgan, made a thunderous start to their campaign after beating the West Indies by six wickets in Dubai.

They bowled the Caribbean team out for 55 after which the batters chased the target down in 8.2 overs. The Tigers, on the other hand, lost to Sri Lanka by five on Sunday in Sharjah. Their batters did an excellent job, helping the team score 171 for four, but their bowling unit flattered to deceive.

The pitch in Abu Dhabi was a tough one to bat when South Africa and Australia locked horns on Saturday. Batting wasn’t an easy task on the surface. The batters need to get their eyes in before going for shots. Chasing should remain the way forward.

England and Bangladesh are yet to face each other in T20Is.

Jos Buttler has been a brute force for England in limited-overs cricket at the top of the order for quite a few years. He scored a magnificent half-century in one of the warm-up matches. Even against the West Indies, he smashed three fours on his way to a score in the 20s. The Bangladesh bowlers can’t afford to let him settle into a rhythm.

Shakib Al Hasan has been in stupendous form with the ball in hand in the ongoing edition of the T20 World Cup. The Magura-born cricketer is the leading wicket-taker of the tournament, having picked up 11 wickets from four matches. He also got two wickets against Lanka, but his efforts went in vain. Shakib can’t afford to drop his guard if Bangladesh wants to make a comeback. 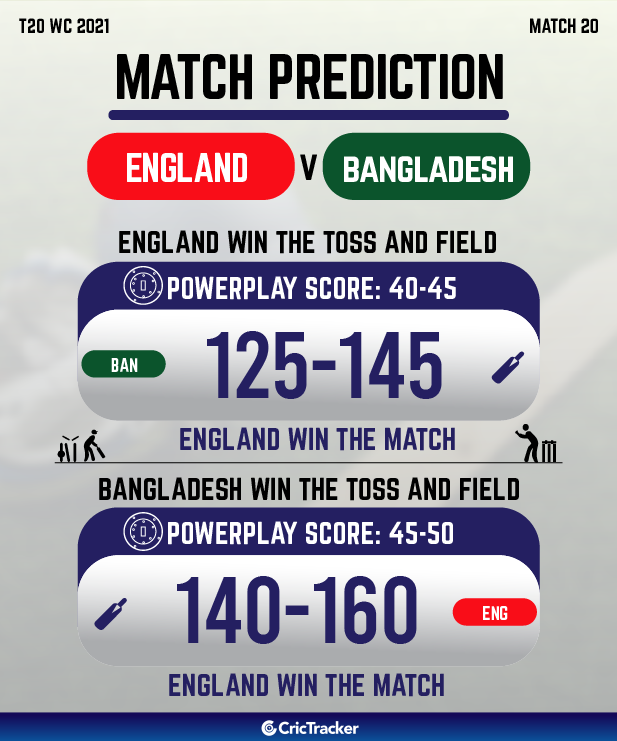