Scotland are yet to beat Nambia in T20 Internationals.

Scotland and Namibia are set to cross swords in Match No.21 of the T20 World Cup on Wednesday, October 27 at the Sheikh Zayed Stadium in Abu Dhabi.  Namibia, led by Gerhard Erasmus, started the tournament with a loss against Sri Lanka but came back to defeat Ireland and the Netherlands.

David Wiese’s inclusion in the team has bolstered their lineup to a significant extent. Scotland, on the other hand, won all their three games in the Qualifiers. However, Afghanistan jolted them with a humiliating 130-run defeat on Monday in Abu Dhabi. Scotland are yet to beat Namibia in T20Is.

The pitch in Abu Dhabi is expected to pose a lot of threats to the batters in the upcoming encounter. The bowlers are most likely to make hay. The upcoming game isn’t expected to be a high-scoring affair by any means. Chasing should be the way forward.

David Wiese is one of the primary reasons why Namibia have managed to qualify for the Super 12s of the T20 World Cup. The veteran was arguably the standout batter for Namibia in the first round. In three matches, the right-hander scored 100 runs from three innings at an average of 100 and an incredible strike rate of 163.93.

Josh Davey has done exceedingly well for Scotland in the ongoing edition of the T20 World Cup. In four matches, the right-arm fast bowler has picked up nine wickets at an economy rate of under seven. He also picked up a four-wicket haul against Papua New Guinea. The Namibia batters need to play him with caution in their upcoming game. 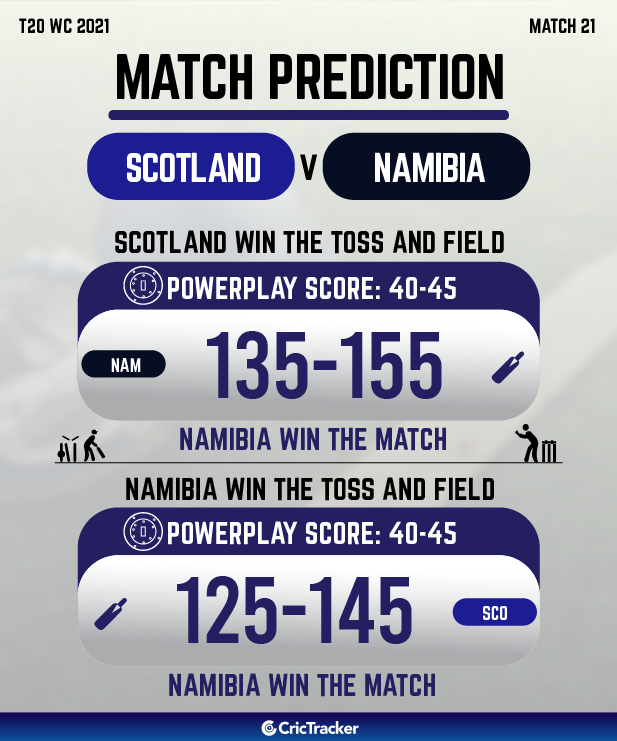 Bhanuka Rajapaksa picks it up and places it straight out of the boundary.