Both teams are yet to open their account in the tournament, having lost one game apiece.

India and New Zealand are set to lock horns in Match No.28 of the T20 World Cup 2021 on Sunday, October 31 at the Dubai International Cricket Stadium in Dubai. The Men in Blue, led by Virat Kohli, are yet to open their account in the mega event, having lost by 10 wickets to Babar Azam’s Pakistan.

India are currently placed fifth in Group 2 above Scotland. The Black Caps, on the other hand, haven’t secured a win as well. Pakistan defeated them by five wickets on Tuesday at the Sharjah Cricket Stadium. It’s pertinent to note that India have never beaten the Kiwis in the T20 World Cup.

The pitch in Dubai has been a sporting one to play cricket for the time being. The track hasn’t been an absolute belter by any means. Batting second should be the way forward as all the matches have been won by the chasing teams.

Rohit Sharma is a class act without a shred of a doubt. In the previous game, he failed to open his account after Shaheen Shah Afridi accounted for his wicket with an in-dipper. But against the Black Caps, the Nagpur-born has impressive records. In 13 matches, Rohit has scored 338 runs at an average of 30.72. In the last two games, he got scores of 65 and an unbeaten 60.

Jasprit Bumrah has been exceptional for India over the last few years regardless of the format he has played in. In 51 T20Is, the speedster has picked up 59 wickets at an economy rate of 6.68. In the previous game against Pakistan, Bumrah failed to pick up a single wicket. But keeping in mind the talent he has, the pacer is expected to make a strong comeback. 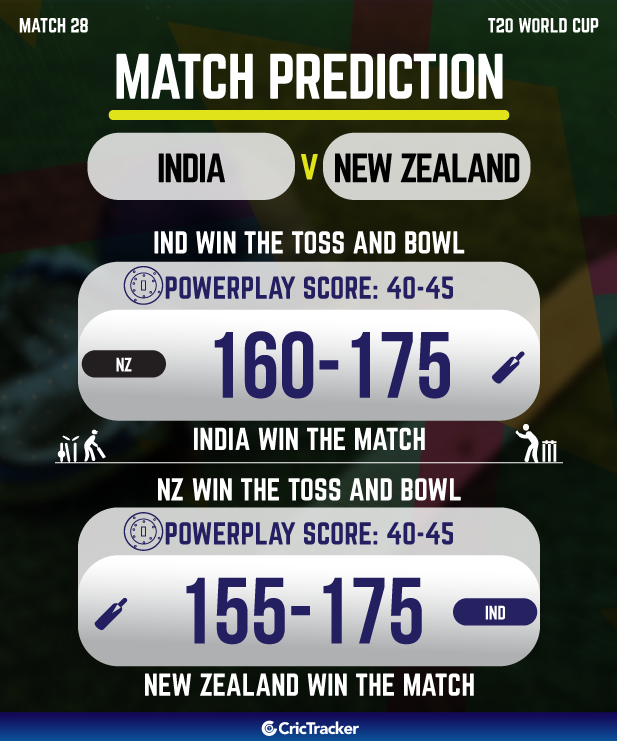