A lot of players from both teams were the part of IPL 2021 which concluded on October 15.

After the razzmatazz of the Indian Premier League (IPL), India and England will lock horns in their first warm-up game of the T20 World Cup 2021. The two teams played a five-match series earlier this year as well with India winning the series which was closely contested. It also remains to be seen which players feature in this game having played a lot of T20 cricket in recent times.

ICC Academy Ground has hosted only one game between Scotland and Namibia in the warm-ups. Pakistan and West Indies will be playing earlier in the day at the same venue and we might see the surface being used for this match. Expect the team winning the toss to bowl first.

KL Rahul is coming off a brilliant IPL season where he ended as the third highest run-getter with 626 runs to his name in 13 innings. Moreover, he also smashed a scintillating century in the last league game for his side and would love to carry on this form in this encounter.

England pacer Tymal Mills has stunningly made it to the World Cup squad thanks to his performances in The Hundred. With Jofra Archer getting injured, the selectors decided to give him an opportunity and may end up playing in the first XI during the Super 12. Expect him to get a chance in this warm-up game.

Today’s match prediction: The chasing team is expected to win this match. 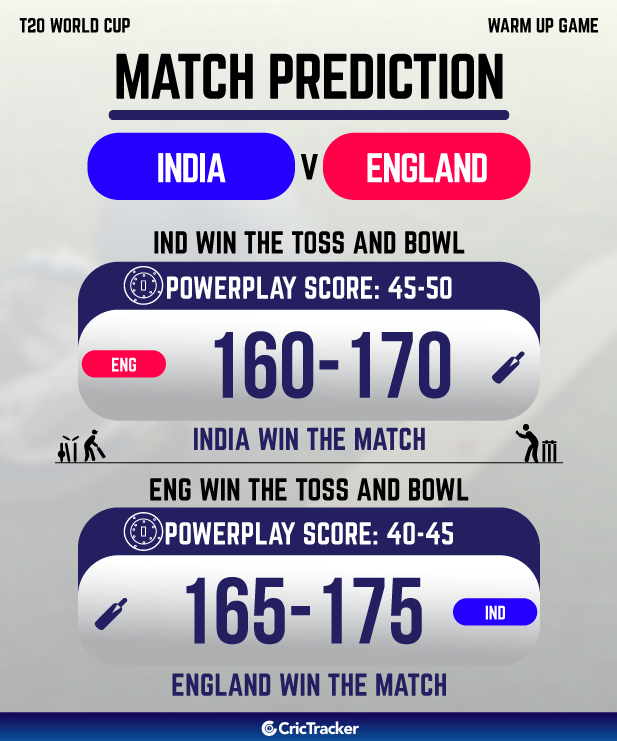