With the pitch being an absolute belter, the batsmen will once again be the protagonists dominating the proceedings at The Village

The 5th match of the T20I Tri-series 2019 will be played between Scotland and Netherland at The Village in Dublin.

We are well and truly into the business end of the tournament where every game will have the potential to have implications not only on the teams involved but also on the other participant. Scotland would be looking to shrug off the ignominy of the four-wicket defeat they suffered at the hands of hosts Ireland, and do an encore of what they have been doing thus far: shellack the opposition under a mountain of runs.

The last time when these two sides met, it was mayhem at The Village. The opening pair of Munsey (127) and Coetzer (89) hammered the inexperienced Dutch line-up to the tune of 200 in just 15.1 overs, helping their side to eventually post 252 in 20 overs. While it was the openers against the Dutch, it was Calum McLeod’s turn to show his talent with the bat, scoring a 42-ball-72.

The Netherlands have had a tournament to forget thus far. While their first game against Ireland was washed out, their inexperienced bowling unit came under the hammer against the rampaging Scotts, something they’ll hope to avert in tomorrow’s game.

Unlike the start of the tournament which was marred by inclement weather, the past few days has seen gorgeous sunshine in Dublin; something which was expected to continue on Thursday with the maximum temperature hovering just a shade under 20 degrees while the minimum is 10.

3-252, 7-194, 7-193, 6-194. These have been the scores in the tournament this far. Looking at the numbers, it’s safe to say that the batsmen have enjoyed themselves at The Village. A flat track, lush-green outfields, and short boundaries- all the ingredients for it being a safe haven for the batters; something which is expected to continue tomorrow.

(Will be added once there is an update) 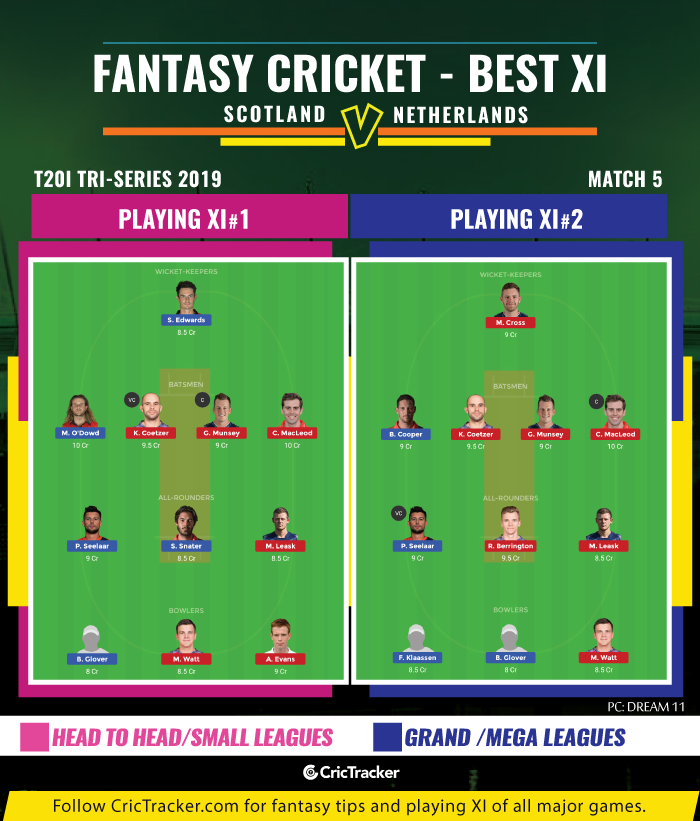 With the pitch being an absolute belter, the batsmen will once again be the protagonists dominating the proceedings at The Village. Thus opting for top-order batters like Munsey, Coetzer as captain/vice-captain will be a prudent punt.

Considering what happened when these two sides last met, Scotland will start as overwhelming favourites against the Dutch.