With rain expected to have her say in the encounter, the wicket might have some moisture for the fast bowlers to exploit.

The 5th match of the Bangladesh Tri-series will be played between Zimbabwe and Afghanistan at Zahur Ahmed Chowdhary Stadium in Chattogram.

This series will be live on Star Sports 2 and Star Sports Select HD 2. Live streaming available on Hotstar.

We are down to the final leg of the T20I Tri-series between hosts Bangladesh, Afghanistan, and Zimbabwe. The 5th match will see Zimbabwe locking horns with Afghanistan in what is essentially a dead-rubber. Both teams couldn’t have more contrasting fortunes going into this game.

While Zimbabwe has been knocked out of the competition courtesy three back-to-back defeats, Afghanistan is flying high on an 11-match winning streak and have looked the best side in the tournament thus far with Mohammad Nabi and Mujeeb Ur Rahman leading the way. The last time these two sides’ met, Najibullah Zadran [69] and Mohammad Nabi [38] smoked seven sixes in a row that propelled the Afghans an eventual match-winning total of 5-197.

While Zimbabwe will look to shrug off the ignominy of defeats and salvage some pride, Afghanistan will look to do what they have been thus far: beat anyone who comes against them.

The weather report for the 5th T20I at Chattogram cuts a sorry tale, unfortunately. As per the reports, scattered thunderstorms are expected on Friday. There is a 50 percent chance of precipitation, meaning we might be in for a shortened game.

With rain expected on Friday, the moisture in the pitch might help the fast bowlers on what has been a good track to bat on thus far in the tournament, with teams regularly scoring 190+.

Zimbabwe’s misery can be testified from the fact that in the leading run-scorer list the batsmen representing them have just 83 runs [Ryan Burl] and 58 runs [Tinotenda Mutumbodzi] against their name; testing what a horror show it has been by their experienced top-order. Once again the onus will be on Brandon Taylor, Hamilton Masakadza and Sean Wiliams to spearhead the fledgeling batting unit. Picking Kyle Jarvis [5 wickets at 23.20] could be worth a punt considering the match is going to affect by rain.

Afghanistan’s batting- especially their middle-order- has been in prime form in the tournament. Spearheading it the vile Mohammad Nabi, who [122 runs in 2 matches] also happens to be the leading run-scorer of the tournament. The likes of Najibullah Zadran [74 runs in 2 games] has given him ideal support and the duo will once again be the key for the Afghans. The bowling unit, as always, will be spearheaded by Mujeeb [4 wickets in 2 games], Rashid Khan [4 wickets in 2 games]. 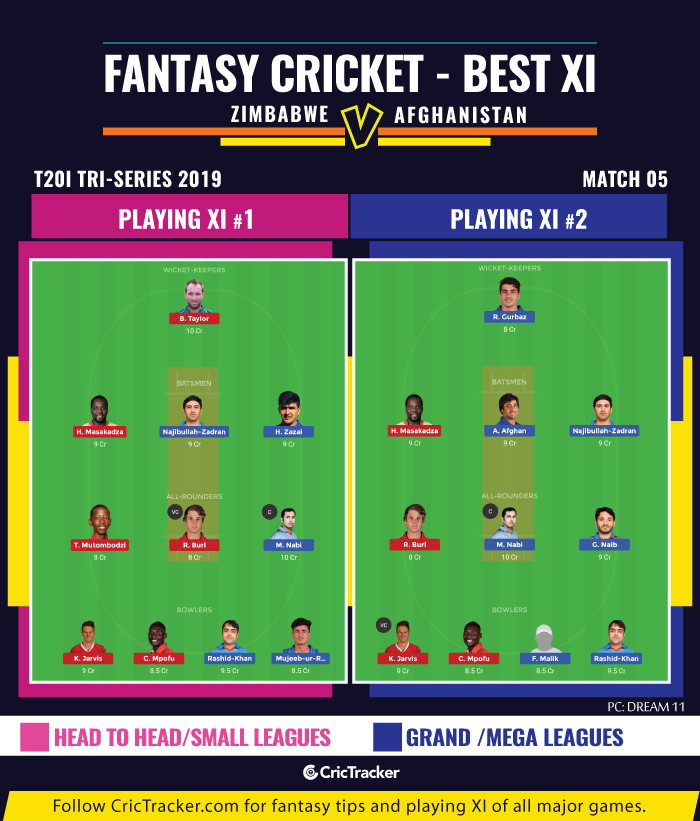 With rain expected to have her say in the encounter, the wicket might have some moisture for the fast bowlers to exploit. Making any of the seamers as captain/vice-captain in your Grand League side could be worth a punt. Also, Mohammad Nabi, his selection as captain is a no-brainer!

T20 is a funny game which can sometimes come back to bite you for your prediction. So, keeping that in, I’ll still say Afghanistan start as overwhelming favourites. Funnier things have happened though. Underestimate Zimbabwe at your own peril.