Jack Boyle scored a century in the previous game for Canterbury.

The 8th match of the Ford Trophy 2019-20 will be played between Canterbury and Otago at the Hagley Oval in Christchurch.

Canterbury had a lucky start to the season as they escaped with a washout in their first match against Central Districts after conceding a big total. However, they registered an inspired 84-run win against Northern Districts thanks to a hundred from Jack Boyle. They will now face Otago team at their home venue in Christchurch who are boosted by the presence of Hamish Rutherford and Neil Broom. Otago won their first match against Northern Districts by 28 runs on DLS method but lost to the defending champions Canterbury by a margin of 5 wickets.

Monday will be a sunny day with clear skies at the Hayley Oval in Christchurch.

The Hayley Oval has short boundaries see team posting big totals. The teams batting second will have an edge, especially while chasing targets less than 270. The scores in recent matches have varied between 225 and 300. Since this is the first match of One-Day season here, we could see big totals if the batting first team begins cautiously.

Jack Boyle is a consistent performer for the Canterbury at the top-order. Matt Bacon has good strike rates in all formats with the ball. In FC cricket, he strikes every 42.1 balls and every 12 balls in T20 cricket. When it comes to List A format, Bacon has 18 wickets at 31.3 but economy reads 6.23. Henry Shipley scored 143 runs at an average of 35.75 and picked up 9 wickets in 2018/19 Ford Trophy. 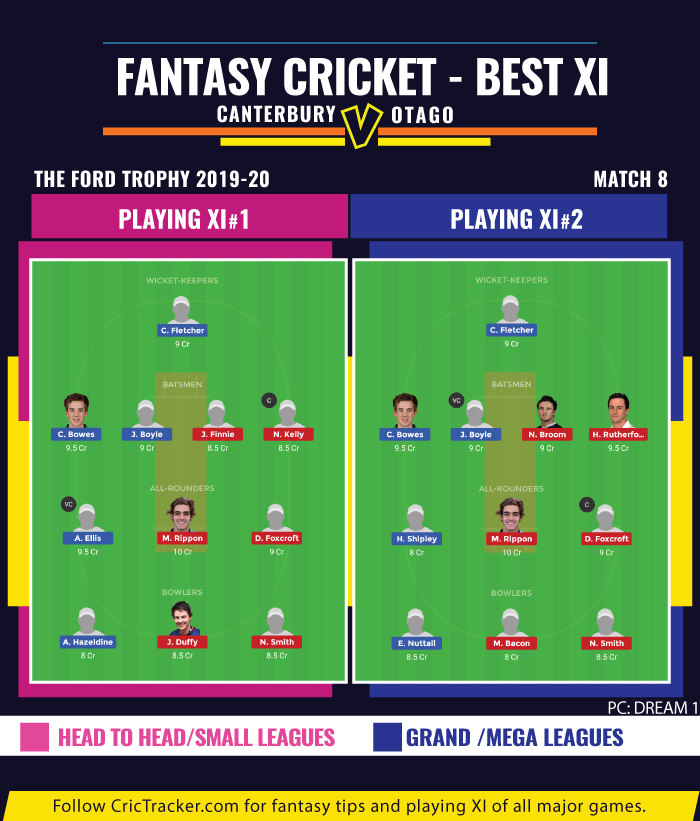 Cole McConchie couldn’t be fitted in any of our suggested XIs. The reason for it has been finding better options, especially in the all-rounders’ category. The inclusion of Hamish Rutherford and Neil Broom is the other factor.

Otago is expected to win this match.