The Spirit are yet to win a single game in the competition.

London Spirit and Southern Brave are all set to lock horns in Match No.15 of the Men’s Hundred at the Lord’s in London. Both teams are languishing at the bottom half of the points table and need wins to go up the table.

The Spirit are placed right at No.8 with one point from their three matches. In their previous game, Trent Rockets beat them by seven runs. The Brave, on the other hand, started their campaign with back-to-back losses.

However, they made a comeback after defeating Birmingham Phoenix by four wickets. Even more than the Brave, the Spirit are in need of a victory.

The pitch in the only game at the venue wasn’t an overly good one for batting. The Rockets scored 123 and the Spirit failed to track down the target. The spinners got a lot of assistance from the surface. The batters may again have to work hard for the runs.

Avg first innings score: 123 (2 matches in the Hundred at Lord’s)

James Vince has been the standout batter for the Brave in the tournament. The right-handed batter has notched 100 runs at an average of 33.33 and a strike rate of 149.25. In his team’s previous game against the Phoenix, he scored a sparkling half-century guiding his side to a triumph. The skipper will look to carry his form even in the next encounter.

Mason Crane is a genuine wicket-taker and he brings forward a lot of value for his team. On July 29, he played his maiden game for the Spirit and did an excellent job. The leg-spinner bowled as many as 10 dots in his spell and was the most economical bowler against the Rockets. Crane also prized out the wicket of veteran Samit Patel. 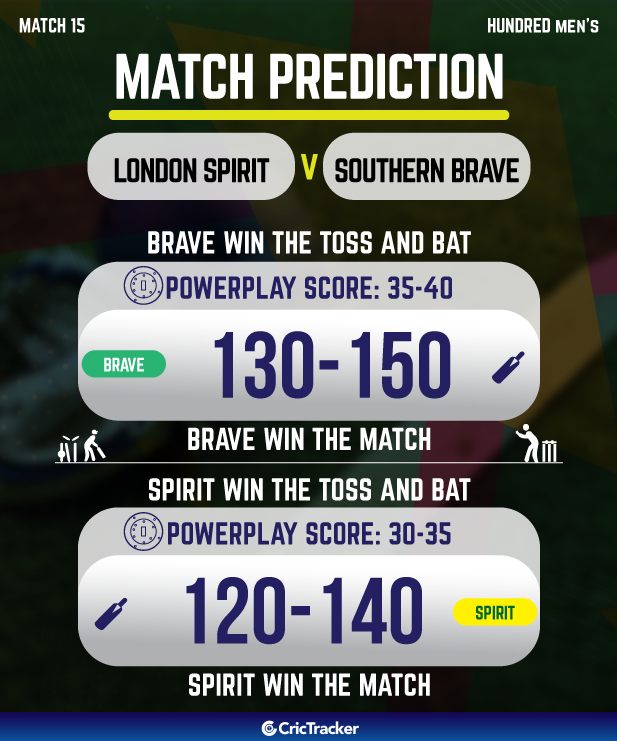