Adil Rashid is the man with the golden arm for Northern Superchargers. 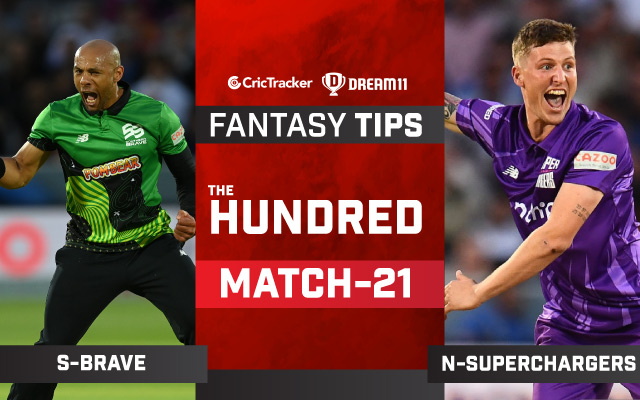 Rain let Southern Brave down for the second time in this tournament as their previous match against Manchester Originals was washed out in a half-day stage. With exceptional top-order batters and even better bowlers at the death, they are looking formidable at the moment and tough to beat. On the other hand, Northern Superchargers are heading into this match with two consecutive victories against Oval Invincibles and London Spirit. Both the teams are in a good form at the moment and we can expect a cracker of the contest in this match.

The track here at Southampton will assist the batters right throughout the match. The bowlers will get whacked if they miss their line and lengths. The margin of error is very less especially in this format. Since the wicket will remain the same throughout the match, bowling first will be a preferable choice.

James Vince had a great last month, making a comeback into the England squad and scoring runs fin the T20 Blast tournament. Now, he is making it count in this format as well. In 4 innings, he has scored 106 runs at a strike rate of 137.66.

Harry Brook has a great future ahead of him. He is the second-highest run-scorer in this tournament with 175 runs in 4 matches, averaging 58.33 and striking at the rate of 152.17.

Termed as a death-over specialist, Chris Jordan is proving the point for his side in this tournament. He has scalped 4 wickets and has also scored 39 runs with the bat.

With a spot available for a batter at the top of the order, skipper David Willey has utilized the opportunity. He played an excellent 81* runs from 45 deliveries against London Spirit and even picked up 2 wickets with the ball as well.

George Garton can make a difference with both bat and ball. Sussex’s left-arm quick has picked up 3 wickets in 4 matches so far in this tournament.

Adil Rashid is the man with the golden arm for Northern Superchargers. He has picked wickets in every match in this competition, taking his total tally of wickets to 8.

Quinton de Kock has made a huge impact already in this tournament, with the bat and as well terrific glovework behind the stumps. In 3 innings, he has scored 51 runs at a strike rate of 204 and has also affected 5 dismissals.

SOB vs NOS Must Picks for Dream11 Fantasy Cricket:

Alex Davies has scored 100 runs in 4 innings in this tournament. It’s worth a risk to pick him as your fantasy team skipper.

Chris Lynn has scored 75 runs in 4 innings in this competition. Considering his average performances, he is a risky captaincy pick.

Colin de Grandhomme is having a tough time in this tournament. Hence, it’s better to avoid him while making your fantasy teams though it’s a tough call.