Carlos Brathwaite is a good captaincy pick for this game. 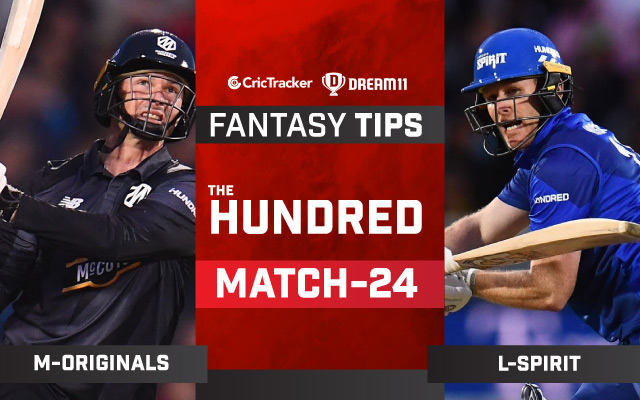 Manchester Originals will lock horns with London Spirit in the 24th match of the Hundred Women’s 2021 on Tuesday (August 10). Manchester Originals have blown hot and cold this season and would like to put up a substantial show in this contest. They are currently fifth in the standings, having won two of their five games.

On the other hand, London Spirit are reeling at the rock bottom of the team standings, having lost four of their five games. One of their matches resulted in a draw. Hence, they would be raring to get their first victory of the season.

By looking at the previous matches played in this tournament, it’s a balanced wicket with equal help for both batters and bowlers. The teams chasing has a better edge of winning matches here and hence bowling first is a preferable option.

Joe Clarke can give London Spirit a tough time in the upcoming contest. The dasher has smacked 89 runs in this tournament so far.

Colin Munro is a player to watch out for from Manchester Originals camp. The southpaw has smashed 107 runs this season so far.

Carlos Braithwaite has been on a roll lately and would like to make a mark in the upcoming game. So far, he has scored 42 runs and has also taken 3 wickets in this tournament.

Mohammad Nabi is one of the finest T20 all-rounders going around and his recent form has been impressive as well. He has slammed 27 runs and has also picked up 6 wickets in this tournament so far.

Matthew Parkinson has been at the peak of his prowess this season and the leg-spinner won’t mind put up another brilliant show. So far, he has scalped five wickets this season.

Steven Finn is an in-form bowler who can shine in the upcoming game. So far, he has picked up four wickets in as many games.

Josh Inglis has been in fine form this season and several eyes would be on him. So far, he has slammed 80 runs this competition.

MNR vs LNS Must Picks for Dream11 Fantasy Cricket:

Mohammad Amir hasn’t been at his prime this season so far. So far, he has taken three wickets in five outings. Hence, he will be a risky captaincy option.

It won’t be very wrong to say that Roelof van der Merwe has been decent in this competition, but not particularly eye-catching. The all-rounder has taken three wickets in five games, besides scoring 44 runs.

Considering there are too many options in the bowlers’ slot, it’s hard to include Lockie Ferguson in the final eleven.