Mohammad Nabi will miss the remaining two matches for London Spirit, while David Wiese will replace him. 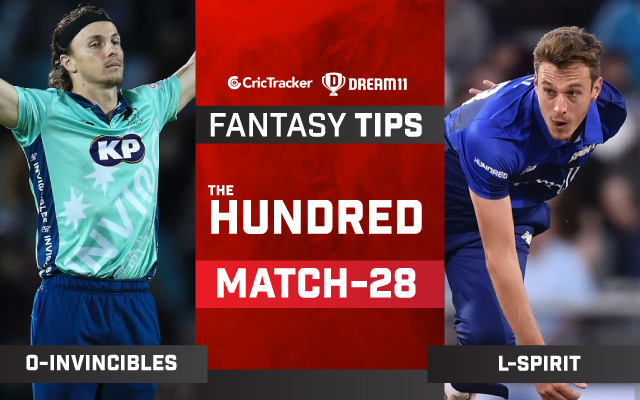 Oval Invincibles will take on London Spirit in the 28th match of the Hundred Men’s 2021 on Saturday. Oval Invincibles kept their chances of playoffs alive by winning their last game against Trent Rockets by 9 runs. From now onwards, every game will be a virtual knockout game for them and they must win their remaining two matches to qualify for the playoffs. At present they are at 5th spot in the standings with 7 points.

Meanwhile, London Spirit will be playing for their pride as they are already knocked out of the tournament with two matches still to be played. With only a solitary victory, they are sitting at the bottom of the table with 3 points.

The batters will get full value for their shots on this friendly batting surface. As usual, it’s going to be a herculean task for the bowlers to contain runs here. The outfield is very fast and the ball travels quickly onto the fence. A score of a minimum of 150 is a must to win the match.

Jason Roy is preparing himself for the upcoming T20 World Cup in some fashion. The 31-year-old Surrey batter has scored the most runs for Oval Invincibles in this tournament. He has accumulated 174 runs in 5 innings, including an unbeaten 5* runs against Trent Rockets.

England’s white-ball skipper, Eoin Morgan hasn’t matched his standards in this tournament. He has managed to score only 85 runs in 5 innings at an average of 21.25, with the highest score of 27. He is, however, an experienced cricketer and can be backed to do well in this match.

Sunil Narine is known for his variations and handy little cameos with the bat. He has scalped 6 wickets in 5 spells and has also scored 44 runs at a strike rate of 146.66.

Roelof van der Merwe has scalped 3 wickets in 5 spells. With the bat, he has scored 55 runs and is yet to be dismissed.

Tom Curran is the pick of the bowlers from Oval Invincibles in this tournament, as he has picked up 7 wickets in 5 spells, with the best figures of 3/29. In just 3 innings, he has smashed 71 runs, with the highest score of 34*.

Middlesex’s right-arm quick, Blake Cullen has caught the eye with his bowling. In 4 spells in this tournament, he has scalped 6 wickets, with the best bowling figures of 2/27.

Oval Invincibles’ skipper, Sam Billings is an innovative player who likes to play unorthodox shots in his innings. He has scored 122 runs in 5 innings at an average of 30.5, with the highest score of 49.

OVI vs LNS Must Picks for Dream11 Fantasy Cricket

Colin Ingram has scored 118 runs in 5 innings so far in this tournament at an average of 29.5. You can take a risk and pick him as your fantasy team skipper.

Adam Rossington will be another risky pick for captaincy. He has scored 94 runs in his 4 innings at an average of nearly 25.

Reece Topley has picked up only 2 wickets in 5 innings so far in this tournament. Hence, it’s better to avoid him while making your fantasy teams.