Brydon Carse will be a good budget pick at 8 credits. 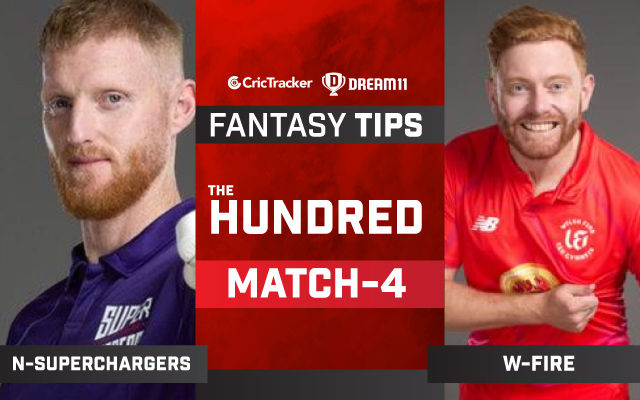 Northern Superchargers will take on Welsh Fire in the 4th match of the Hundred Men’s on Sunday. Northern Superchargers have got some renowned T20 superstars in their line-up, in the likes of Faf du Plessis and Ben Stokes. The spin duo of Adil Rashid and Mujeeb-ur-Rahman will create numerous problems for the opposition batters. Harry Brook, who had an excellent T20 Blast tournament, will be an X-factor for the Superchargers.

Meanwhile, with not as many big names, Welsh Fire looks comparatively weaker on the paper. That being said, they have got a few game-changers in their squad, in the likes of Tom Banton, Jonny Bairstow and Glenn Philips. The management needs to have a backup for Jonny Bairstow, as he will soon join the England squad ahead of the India Test series.

It’s a completely flat batting track with no clear advantage for the bowlers. It’s quite tricky to chase the target under the lights, so it’s better to bat first.

Chris Lynn has to prove that he still has got the same firepower as before. He has been ignored by the Australian T20I side and it’s a perfect opportunity for him to make a statement.

Glenn Philips had a successful T20 Blast for Gloucestershire, where he scored 500 runs in 12 matches at an average of 55.55, with the highest score of 94*.

Ben Stokes will play a vital role for Superchargers. He hasn’t bowled too many overs in the Pakistan ODI series, so it will be interesting to see whether he is involved in bowling in this tournament. With the bat, he is a dangerous batsman in shorter formats.

Jimmy Neesham didn’t have the greatest of tournaments in this year’s T20 Blast, but he is still a good pick for your fantasy teams. The New Zealand all-rounder is expected to do well in the newest format.

Adil Rashid is one of the most successful spin bowlers with the white-ball for England. He bowls at the right channels and his variations fools the batsmen.

David Willey is always effective with the new ball. His ability to swing the ball makes him one of the toughest bowlers to hit. He is handy with the bat as well.

Tom Banton is one of the hottest young prospects of England cricket. He can play some unorthodox shots which is very effective in the shorter formats of the game. He will be a good pick for your fantasy teams.

NOS vs WEF Must Picks for Dream11 Fantasy Cricket:

Harry Brook has scored 485 runs in this year’s T20 Blast at an average of 80.83. It’s worth a risk to pick him as your fantasy team skipper.

Ben Duckett has the ability to hit the ball hard. He has scored 367 runs in this year’s T20 Blast. You can take a risk and pick him as your fantasy team skipper.

Since Tom Banton and Jonny Bairstow are the frontline wicket-keeping options, it’s better to avoid John Simpson while making your fantasy teams.