Blake Cullen will be a good budget pick at 8 credits. 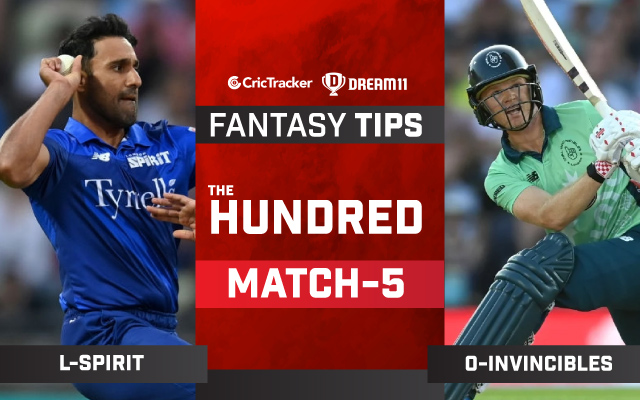 London Spirit will take on Oval Invincibles in the 5th match of The Hundred Men’s 2021 on Sunday. Despite putting up a decent show with the bat, London Spirit lost to Birmingham Phoenix by 3 wickets in their opening game. Zak Crawley was the only major contributor with the bat for London Spirit.

Meanwhile, Oval Invincibles started off well with a narrow 9 run-victory over Manchester Originals. Skipper Sam Billings played a good knock and just missed a half-century by a run. They have a good depth in their batting line-up and will start as favorites for this match.

As usual, the batters will find it difficult in the initial overs of play. The bowlers need to utilize the conditions in favour of them by bowling at the right channels. Batting will become much easier in the latter half and hence bowling first is a preferable option.

Zak Crawley is now aiming for his chance in the England limited-overs side. He played incredibly well in the opening game against Birmingham Phoenix by scoring 64 runs from 40 balls.

Jason Roy can go after any bowler in the powerplay. He announced his arrival into the Hundred format by scoring 20 runs from 12 balls against Manchester Originals.

Sam Curran can be used as a floater anywhere. He had a good game with the ball against Manchester Originals, where he picked up 2 wickets.

Mohammad Nabi is another handy customer with both bat and ball. He picked up one wicket against Birmingham Phoenix and gave away only 20 runs in his full quota of 20 balls. He scored 6* runs from 4 balls.

Mohammad Amir was the pick of the bowlers from London Spirit in the last game against Birmingham Phoenix, where he picked up 2 wickets in his 17 balls.

Sam Billings was the player of the match in the last game against Manchester Originals for his 49 runs from 30 balls, which includes 4 fours and 2 sixes.

LNS vs OVI Must Picks for Dream11 Fantasy Cricket:

Ravi Bopara can contribute equally with both bat and ball. He will be a risky pick as your fantasy team skipper.

Mystery spinner Sunil Narine was the most economical bowler for Oval Invincibles in the last game against Manchester Originals. You can take a risk and pick him as your fantasy team skipper.

Laurie Evans is a decent player, but considering the competition in the batters’ category, it’s better to avoid him while making your fantasy teams.