Twin Brothers Matt Parkinson and Callum Parkinson will face off against each other in this match. 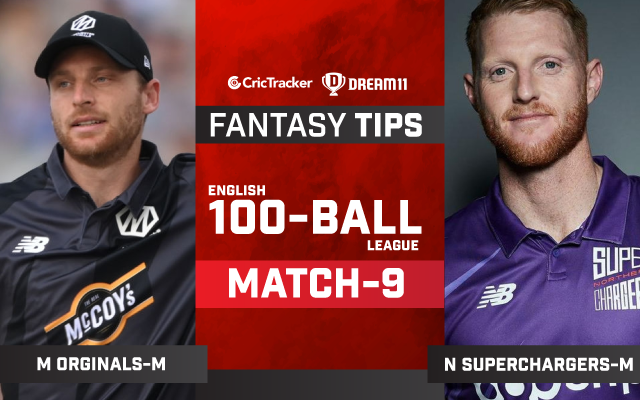 Manchester Originals will host Northern Superchargers in the 9th match of the Hundred Men’s 2021 on Wednesday. After losing their 1st match against Oval Invincibles by 9 runs, Manchester Originals then made a strong statement by winning their next game quite convincingly by 6 wickets against Birmingham Phoenix. Matt Parkinson spun the way for Originals with 4 scalps.

Meanwhile, Northern Superchargers will be really unlucky to lose both their matches against Welsh Fire and Trent Rockets. They showed a lot of fight in both games but lost their way in the finishing stages of the match. They need to avoid their 3rd straight defeat in this match.

Traditionally the wicket here at Old Trafford is famous for batting, however, we encountered two low-scoring games on Sunday. The surface still favors the batters and they just need to play their natural innings. Anything over 140 makes a good score on this wicket.

Southpaw Colin Munro is likely to open the innings for Originals in the absence of Jos Buttler in this match. New Zealand Southpaw has scored 33 runs in 2 matches at a strike rate of 16.5.

Harry Brook is the upcoming young talent who had a good domestic season this year. He is making his performance count in this format as well, in 2 matches he has scored 100 runs at a strike rate of 163.93.

Carlos Brathwaite is carrying his good form from the T20 blast into the Hundred as well. He has done a good job with both bat and ball in the first two matches, he picked up 2 wickets and scored 41 runs with the bat.

Matt Parkinson deserves acknowledgment from everyone for his brilliant bowling performances against Birmingham Phoenix where he picked up 4 wickets by conceding just 9 runs.

Callum Parkinson impressed everyone in his 1st match against Trent Rockets. He picked up the important wickets of Samit Patel and Lewis Gregory, and he conceded just 19 runs in his 15 balls.

Phil Salt looked good in the last game against Birmingham Phoenix until he was dismissed by Imran Tahir for 22 runs. He is a good buy for your fantasy teams.

MNR vs NOS Must Picks for Dream11 Fantasy Cricket:

Carlos Brathwaite can score points with his all-round performances. It’s worth a risk and you can pick him as your Dream11 fantasy team skipper.

Chris Lynn is a good striker. He has scored only 13 runs in 2 matches so far in this tournament. You can take a risk and pick him as your fantasy team skipper.

Brydon Carse has been expensive in the first two matches. He conceded 12.48 runs an over, It’s better to avoid him while making your fantasy teams.