It is advisable to include 4 all-rounders in your Dream11 fantasy teams. 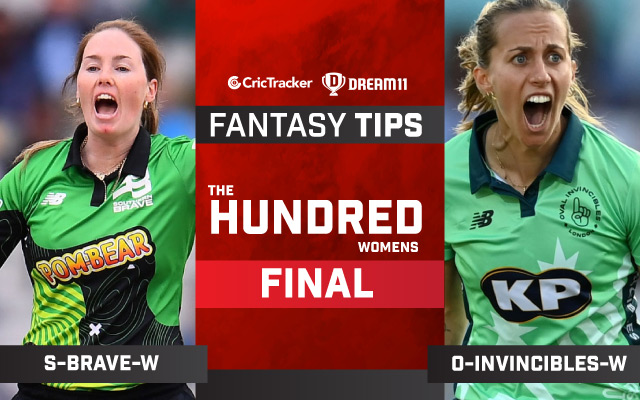 Southern Brave Women will go head-to-head against Oval Invincibles Women in the final of the Hundred Women’s 2021. After emerging as the group winners, Southern Brave directly qualified for the finals. They have had an outstanding tournament, winning 7 of their 8 matches. They will now hope for a fantastic finish to their campaign.

On the other hand, all-round contributions from Marizanne Kapp and Alice Capsey, and stellar bowling performances from in-form Tash Farrant provided a comfortable 20-run victory for Oval Invincibles in the Eliminator against Birmingham Phoenix. They had lost to Southern Brave earlier this week by 30 runs and it’s a perfect opportunity to seek revenge in the finals.

Lord’s has hosted many thrilling finals over the years and is all set to host the 1st ever final of the Hundred format. It’s a good sporting track where the game can change at any point of the match. The quick bowlers will get the early advantage, and later on, the batswomen are likely to dominate the game.

Sophia Dunkley is showing her pure class in this tournament. She hasn’t been dismissed in her last 3 matches. Overall in this tournament, Dunkley has amassed 244 runs in 8 matches at an average of 48.8 and a strike rate of 143.52.

Stafanie Taylor’s on-field presence will play a huge role for Southern Brave in the final. The West Indies women’s team’s skipper has scored 164 runs in 8 innings at an average of 54.66, and has also picked up, 3 wickets with the ball.

Tash Farrant has been remarkable with the ball all throughout the tournament. The 25-year-old left-arm medium pacer is the leading wicket-taker in this competition with 18 wickets at an economy of 6.52.

Marizanne Kapp deserves all the credit for her all-round performances in the Eliminator against Birmingham Phoenix, where she scored 37 runs and also picked up and 3 wickets with the ball.

Amanda Wellington is the pick of the bowlers from Southern Brave Women in this tournament, with 13 wickets in 8 matches. You can take a risk and pick her as your fantasy team skipper.

Alice Capsey has scored 132 runs and has also picked up 8 wickets in this competition. It’s worth a risk and you can pick her as your fantasy team skipper.

Grace Gibbs is not having the best of tournaments. She has picked up 2 wickets only and has scored 46 runs. At 8.5 Cr, there are better options available elsewhere.