Deandra Dottin will be a good pick for captaincy. 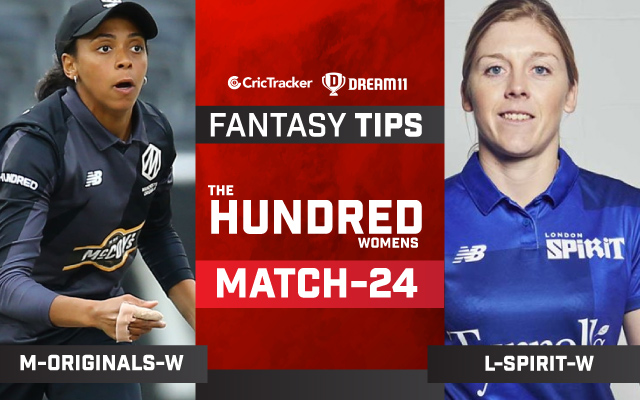 Manchester Originals Women will be up against London Spirit Women in the 24th match of the Hundred Women’s 2021 on Monday. Both teams haven’t made a stellar start to the season and would be raring to emerge victoriously in this contest. With two wins in five outings, the Spirit are sixth in the team standings.

They, however, would be confident, having defeated Northern Superchargers Women by seven wickets in their last outing. On the other hand, nothing much has gone Manchester Originals way this season. The Kate Cross-led side are reeling at the rock bottom of the points table, having won just one of their five games.

Considering the previous matches played at this venue, Old Trafford has a lot of assistance for the bowlers as low scores were witnessed. While fast bowlers with get assistance initially, spinners will also have a part to play as the game progresses. Hence, batters of both teams must be on their toe.

Emma Lamb has been on a roll this season and one can expect her to fire in this contest. So far, the right-arm pacer has scalped four wickets alongside scoring 40 runs this season.

Kate Cross is another player to watch out for from the Manchester Originals Women camp. The skipper has so far scalped five wickets in four outings.

Heather Knight will hold the key to London Spirit Women in this contest. She has slammed 110 runs alongside taking one wicket in this tournament so far.

Deepti Sharma is another player who can trouble Manchester Originals Women in the upcoming clash. So far, the off-spinner scalped five wickets, alongside scoring 32 runs.

Sophie Ecclestone has scored 42 runs in this tournament so far alongside taking three wickets. You can take a risk and pick her as your fantasy team skipper.

Naomi Dattani has scored 60 runs in the competition so far alongside scalping a couple of wickets. She will be a risky captaincy pick.

Amara Carr has scored 19 runs in five games so far. Hence, she shouldn’t be a part of any of your fantasy teams.