The Brave are placed on top of the points table with five wins from six matches.

Southern Brave and Welsh Fire are set to lock horns with each other in the 25th match of the Women’s Hundred at the Rose Bowl in Southampton on Wednesday. The Brave, led by Anya Shrubsole, are currently placed on top of the points table.

Both their last two matches were affected due to persistent rain. After losing to the Manchester Originals, the Brave came back with a seven-wicket win over Northern Superchargers.

The Fire, on the other hand, need a win to stay in contention for the next round. Their confidence will be on the lower side after the 10-wicket loss at the hands of Birmingham Phoenix.

The pitch in Rose Bowl hasn’t been an easy one for batting until now. However, it has favoured the team, batting second. Therefore, batting second should be the way forward for both teams in the upcoming match.

The fact that she has two T20I centuries to her name shows the potential Danielle Wyatt has. In the ongoing Hundred, she hasn’t disappointed one bit. In six matches, the right-hander has notched 135 runs at an average of 27 and a strike rate of 131.06. With a top score of an unbeaten 69, she has shown the damage she can do at the top of the order.

Amanda Jade Wellington has been stupendous for the Brave in the tournament. With the ball in hand, she has picked up eight wickets and is also the leading wicket-taker for her team. Her economy rate of 0.80 shows that she has been able to put a lid on the run-scoring. Wellington will again be expected to deliver the goods in the next match. 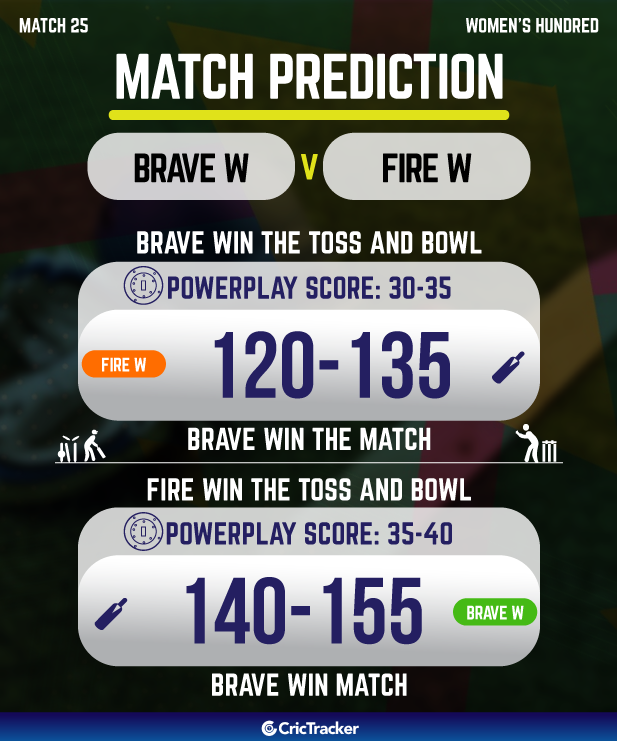