Lucy Higham will be a decent budget pick at 8 credits. 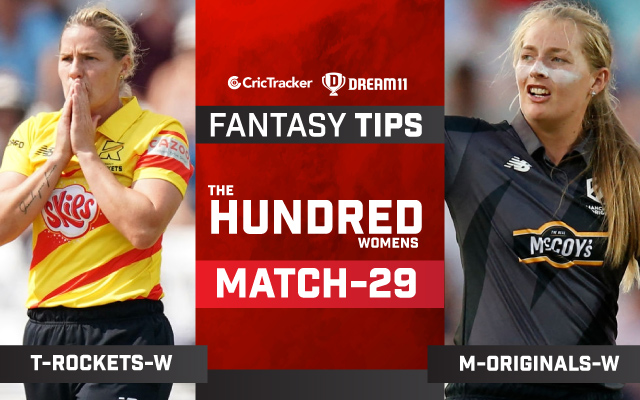 Trent Rockets Women will host Manchester Originals in the 29th match of the Hundred Women’s 2021 on Sunday. Trent Rockets must win this match by a huge margin to give themselves a chance to qualify for the playoffs. Not only that, but they need to depend on other results as well. They are currently placed at the fourth spot in the standings with 7 points.

Manchester Originals, on the other hand, are almost out of the playoffs race. A win against Northern Superchargers in their previous encounter gave them, albeit negligible, but a glimmer of hope. They must win this match by a massive margin to keep their playoff chances alive.

It’s a well-made surface for the batters where plenty of runs has been scored right throughout this tournament. The teams batting first have won 2 of the last 3 matches played here. Going with previous results, it’s better to bat first on this track.

Also Read: Shreyas Iyer and T Natarajan receive a green signal to feature in the remainder of IPL 2021

Natalie Sciver is doing a fine job for Trent Rockets in this tournament. She has scored 207 runs in 6 innings at an average of 34.5 and has also picked up 3 wickets with the ball.

Sammy Jo-Johnson has got the most wickets in this competition. She has picked up 15 wickets, with the best bowling figures of 4/15. Not to forget, she has even scored 87 runs with the bat.

Lizelle Lee scored vital 68 runs in the previous game against Northern Superchargers, which helped her side to register their second win in this tournament. Overall this competition, she has accumulated 168 runs at an average of 33.6.

Kate Cross has picked up 10 wickets in this tournament, which is the most by any player for Manchester Originals. She is a must buy for your fantasy teams.

Heather Graham has been impressed with her all-round performances. So far in this tournament, she has scored 104 runs in 6 innings and has picked up 6 wickets as well. She is a risky captaincy pick for your fantasy teams.

Sophie Ecclestone has managed to score 74 runs. With the ball, she has scalped 3 wickets in this tournament. You can take a risk and pick her as your fantasy team skipper.

Since Rachel Priest and Lizelle Lee are the frontline wicketkeepers, it’s better to avoid Eleanor Threlkeld while making your fantasy teams.