The year of Rohit Sharma: From lazy elegance to hardcore diligence

The year of Rohit Sharma: From lazy elegance to hardcore diligence

Right from the start of the year Sharma has been on a roll and has been the workhorse of India's batting department across formats.

The hourglass is quickly running out of the sand and its time for the cricketing universe to turn it upside down for another calendar year. After an eventful 2019 which saw some of the indelible moments in the history of the game now, it is onto 2020 to enthral the cricketing fraternity.

Coincidentally it will also mark the beginning of another decade which is full of hope and optimism for the gentlemen’s game. Having said that the cricket lovers will like to hold onto 2019 because of the pure action which unfolded in front of them.

Be it the iconic World Cup or the nail-biting Ashes series the year has been full of extraordinaire performances. Country-wise from England to Afghanistan every cricketing nation has enjoyed their day in the sun in the last 12 months. While on the personal count there are some individuals who redefined their careers in the ongoing year. One of them is India’s Rohit Sharma whose individual brilliance reached a new level which only a few can think of.

In terms of scoring runs and match-winning performances, the right-hander has done everything in his might to make 2019, the milestone year of his career. Not only he has scored tons for fun but he has also overshadowed Virat Kohli’s batting credentials, which is an achievement in itself.

Right from the start of the year Sharma has been on a roll and has been the workhorse of India’s batting department across formats. It seems that the Mumbaikar has finally decoded the puzzle of greatness which was tagged along from the moment he played his first game in the Blue jersey.

Rohit Sharma has paved his way to becoming a fan-favourite

It has not been an easy journey for Rohit as he has been receiving praises from all the corners since his promising debut in 2007. In his initial days, the likes of Sunil Gavaskar and David Lloyd termed him the next batting genius from the country after his knock against South Africa in the inaugural T20 World Cup. Soon he became a fan-favourite because of his batting prowess and the phrase ‘lazy elegance’ started getting associated with his craft. From there on those words have latched onto his career like Eddie Brock’s symbiote and it has been a boon and curse at the same time.

Whether he scores a double hundred or gets out for a duck his talent takes the front seat for most of the cricketing discussions. Sometimes his technical flaws have also been dubbed as the negative outcome of his natural flair which doesn’t make any sense considering the professionalism of the sport. It’s true that he has struggled to repeat his limited-overs success in his red-ball game but there are hundreds of players who have faced the same problems. In layman terms very rarely has the cricketing community accepted Rohit’s shortcomings.

Most of the times people repeatedly chatter about their expectations from the Hitman rather than talking about his mental resolve and undying passion for the game, which is not the case with Virat Kohli and Steve Smith. Besides he has never been applauded enough for his hard work and grit because of his inconsistency in the past years.

For instance, his recent double hundred against Proteas is the fine example of his graft as he weathered the early storm to rediscover his mojo in the whites. Even in 2019, World Cup Rohit showed his other aspects of the game like persistence and self-belief by scoring more than 600 runs in the series.

Some mind-boggling numbers of Rohit Sharma in 2019: 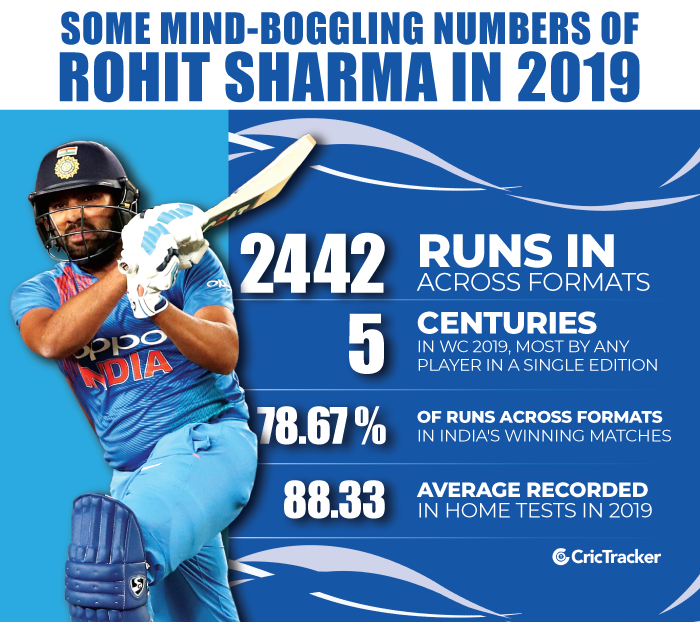 In all 2019 is the year which highlighted the other qualities of the so-called gifted Rohit Sharma. Not only he achieved unparalleled success in limited-overs cricket but he also announced his comeback to the Test arena in style. Though it took him 12 years to master the art of consistency it can define his legacy in the times to come. So he will be a little hesitant to bid goodbye to 2019 as it might turn out to be the most fruitful year of his career.