A win helped the Thunder reclaim their top spot in the table.

Sydney Thunder, after a brilliant start to the ongoing BBL, fell a tad after losing three matches on the trot. However, the 46-run win over the Sydney Sixers would have given them a whole lot of confidence. Their next match is against the Adelaide Strikers on Sunday, January 24 at the Adelaide Oval.

With an impressive net run rate of 1.041, they have every chance of topping the points table. The Strikers, on the other hand, can’t afford blemishes, being placed seventh in the points table. The table is congested in the middle and a victory could take the strikers among the table toppers.

The Strikers would be going into the game on the back of an 82-run win over Brisbane Heat and that should keep them in good stead. A loss would put them in dire straits going into their last match.

The pitch in Adelaide has mostly been a sporting one. But in the last game, the track turned out to be an absolute belter. It’s pertinent to note that the team, batting first has gotten a fair amount of assistance from the surface.

Hence, chasing can be avoided. There are no chances of rain during game time. The clouds will be there with the temperature around 34 degrees Celsius. The humidity won’t be high.

Playing Combinations for THU vs STR

IPL 2022: 5 teams that might target Steve Smith in mega auction

He has two fifties and the century he notched against the Sixers would have upped his confidence by a large extent. If he gets going then the Strikers might have to end up chasing leather.

Alex Carey has been the standout batsman for the Strikers in the tournament. In 10 matches, the left-handed batsman has 381 runs at an average and strike-rate of 38.10 and 128.71 respectively.

Like Hales, even Carey hammered a T20 century against the Heat. The knock should keep him in a positive frame of mind. However, the Strikers would be needing another knock of substance from him. 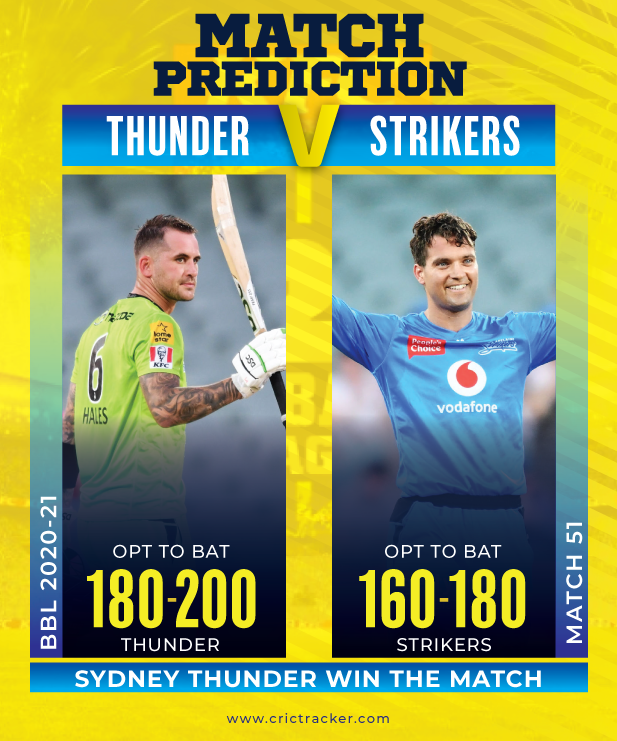