Top 5 teams with most centuries in IPL history

Kings XI Punjab toppled RCB to the top of the list on Sunday thanks to Mayank Agarwal.

The 13th edition of the Indian Premier League (IPL) has begun with a bang. The first week witnessed some exceptional cricket and the second week has got off the mark with a special century from Kings XI Punjab’s (KXIP) Mayank Agarwal in Sharjah. The match 9 of the season was played between KXIP and the Rajasthan Royals (RR) and KL Rahul and Agarwal made the most of the short boundaries.

The latter outscored his partner comfortably in run-scoring as he went on to smack a 45-ball ton to become the second fastest Indian centurion ever in the cash-rich league. This century also helped the KXIP franchise top the charts of the sides with most centuries in IPL history.

Agarwal’s 106-run knock turned out to be KXIP’s 13th ton in the team’s 13-year history in 179 matches. The Royal Challengers Bangalore (RCB) also have 13 tons to their name but they have played a total of 183 games so far in the T20 tournament.

The next team in the list is the Chennai Super Kings (CSK) who have witnessed their players scoring 8 centuries in 168 matches. Interestingly, they have played a couple of seasons less compared to the other teams in the charts and still are at the third position. Moreover, the number seems to be less from other perspective as CSK have qualified for the playoffs in the every edition they played in the IPL.

Dehli Daredevils/Capitals also have eight centuries in their IPL history but those have come in 179 matches and for the same reason, they are below the three-time champions. The Rajasthan Royals (RR), the franchise which won the inaugural IPL season, is at the fifth place in this list with their batsmen crossing the 100-run mark as many as six times in these 12 years (13th edition in progress.

They have also played the least number of matches among all the sides in the charts. Like CSK, even the Royals were banned from playing for two years and this is an incredible achievement from the team and even the other sides in this list. 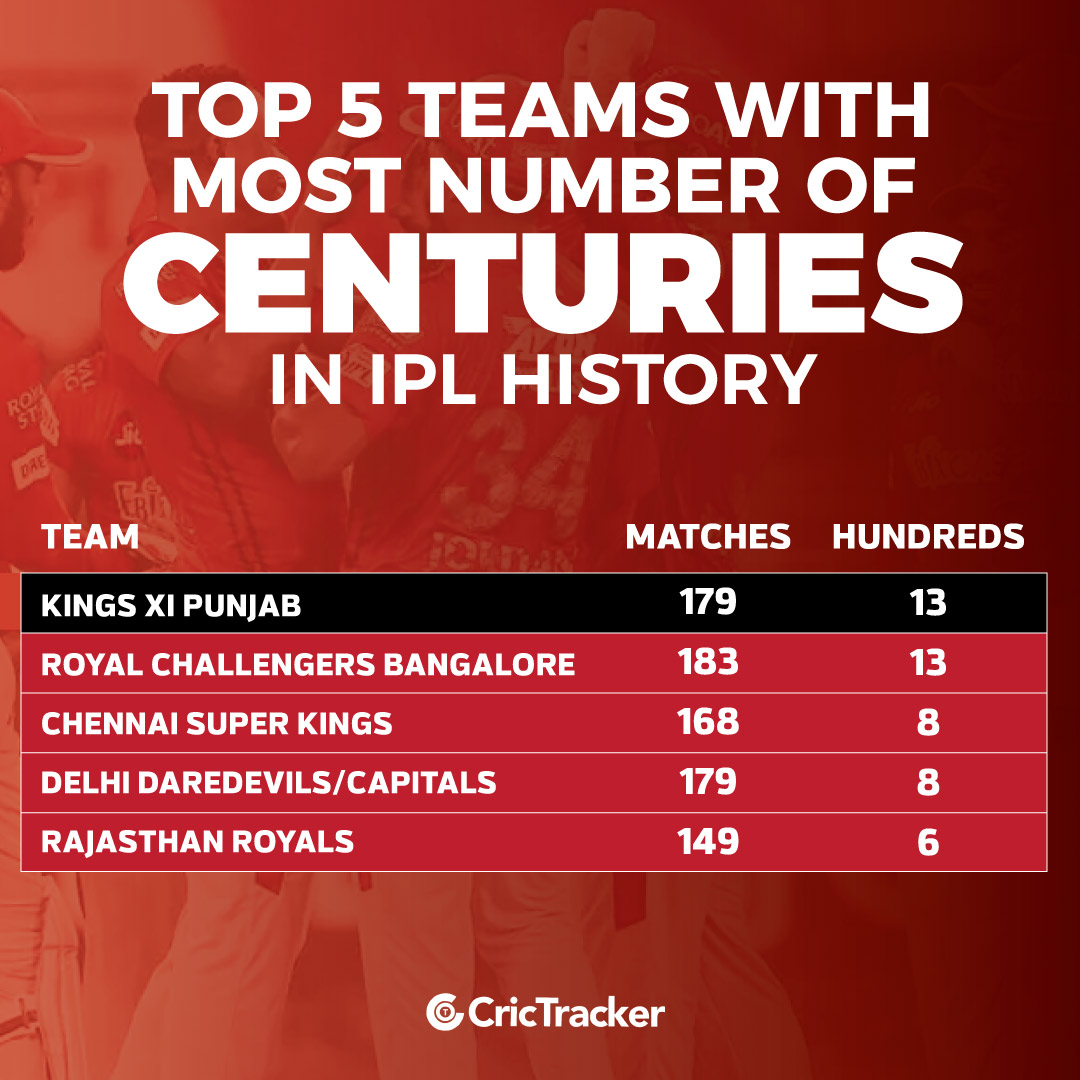