Not surprising that Chamari Athapaththu is the popular captaincy pick in Fantasy Cricket. 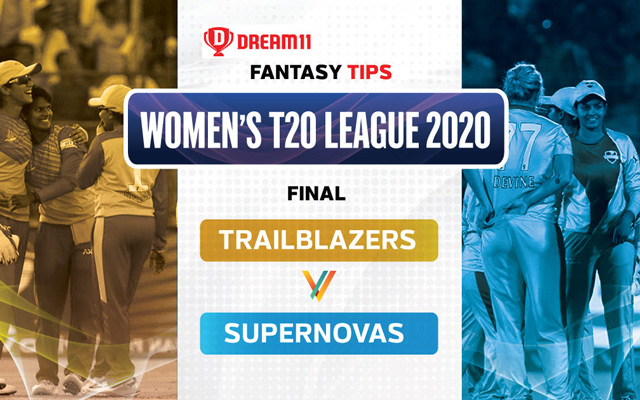 Supernovas won the toss and opted to bowl first

The final of the Women’s T20 Challenge 2020 will be played between Trailblazers and Supernovas at the Sharjah Cricket Stadium in Sharjah.

This game is scheduled to start at 07:30 PM IST (6:00 PM local time) (2:00 PM UTC). The game will be telecasted on the Star Sports Network. Also, live streaming will be available on Disney+ Hotstar.

Supernovas defeating Trailblazers in the last-ball thriller on Saturday has led to the same two teams facing off in the final again on Monday in Sharjah. However, Velocity, led by Mithali Raj, were knocked out with a win for the Supernovas as Radha Yadav kept her composure to not let the opposition score 10 runs in the last over. Harmanpreet Kaur and her girls will now be hoping to defend their title and win the trophy for the third consecutive time.

Trailblazers, on the other hand, are looking a pretty confident unit this time around. A huge win over Velocity handed them a place in the final easily. Even then they put up a great show while chasing down 147 the other day and the most important thing was, their middle and lower-middle order almost did the job for the team. The likes of Deepti Sharma and Harleen Deol were brilliant with the bat and their bowlers are also experienced enough.

There is no chance of rain at all while the temperature will come down under 30 Degrees Celsius by 6 PM local time. The players will feel a bit better while on the field as well.

Match 3 was played on the pitch where Match 1 of the Women’s T20 Challenge was played. Accordingly, this match could be played on the surface where Velocity were bundled out for 47. In that case, the pitch could be skiddy and the batters should be careful of playing the spinners on the backfoot.

It seemed as if Poonam Yadav wasn’t 100% fit in the previous match. If she is ruled out, then Arundhati Reddy might get a chance in the XI.

What happened in the cricket world today - September 21

Chamari Athapaththu has once again proved her mettle at the top of the order. She scored a brilliant 67 off 48 balls in the previous game and will be again one of the top picks for this match.

Harleen Deol was one of the surprise top player in the last game. She was the sixth bowler for Trailblazers and ended up bowling well while coming in at 7 to bat, she scored a quickfire 27 off just 15 almost taking the team over the line.

Smriti Mandhana is a dangerous batter irrespective of her form. She scraped through to 33 off 40 balls and will be looking to lead from front for the team in the title clash.

Radha Yadav has been exceptional in both the matches. Her left-arm spin has kept the batter at bay from playing big shots and she will play a crucial role for Supernovas with the ball.

It is very difficult to accommodate Jhulan Goswami in Team 1 with a lot of players having high credits. If you want to pick her, simply remove Ecclestone and then you can also pick a 8.5 or 9 credit player in place of Priya Punia or Harleen Deol.

Trailblazers are expected to win the match.