The first Test match between England and South Africa got kicked off at Lord's. 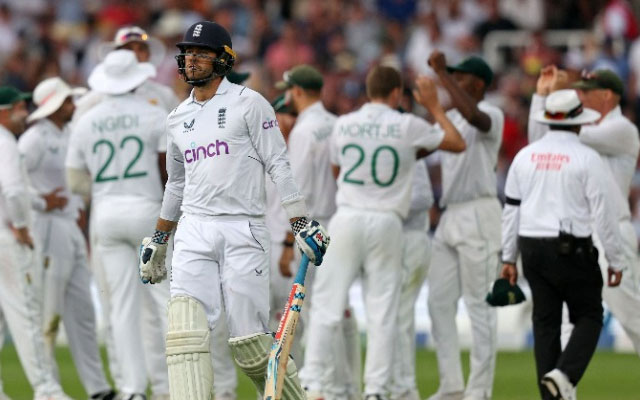 South Africa’s red ball series against hosts England got off to an outstanding start as the visitors took control of the game from the onset reducing the England innings to 116/6 before the rain gods intervened to save the blushes of the hosts at the Lord’s in the first day of the opening Test match of the series as only 32 overs were possible in the day’s play.

The Protean skipper, Dean Elgar, who ruffled a few feathers with his blunt remarks on ‘Bazball’, put in the hosts to bat after winning the toss. His bowlers backed up his decision, especially Kagiso Rabada, who recovered from an ankle injury to send back the English openers cheaply in his opening spell.

England were seemingly recovering from those earlier blows before the young Protean sensation Marco Jansen landed a fatal blow by trapping Joe Root in front. The former England skipper’s departure brought in the red hot Jonny Bairstow at the crease, who has had a sensational red ball summer, registering four tons in his previous five outings.

But the rapid pace of Anrich Nortje landed the killer strike as he knocked over Bairstow’s middle stump for a four-ball duck. The hosts were in a perilous position losing four top-order batters for just 55 runs, and skipper Ben Stokes, who was irked by his opposite numbers comments, played some exquisite shots in a 45 runs stand with Ollie Pope.

South Africa, though, clawed back the ascendency by dismissing the flamboyant English skipper on the last ball of the morning session. The procession followed after Lunch as Nortje grabbed his third wicket of the match, disturbing Ben Foakes’ stumps and registering 50 wickets in red-ball cricket in the process.

Ollie Pope has been the only saving grace for the hosts on an otherwise horrendous opening day with his eye-pleasing 61. England will hope he can score big in the first innings to post a competitive tally on the board as they finished with 116/6, with Pope and Stuart Broad at the crease.

Kagiso Rabada produced a fiery opening spell and was complimented well by Jansen who produced some stunning deliveries and was unlucky to have just one wicket to his name, but the hero of the day has to be Nortje, who bowled a fiery second spell to run through the English middle order.

Anrich Nortje grabbed three wickets to put the visitors on top on day one at Lord's 👊#ENGvSA | #WTC23https://t.co/QSWSuzyjWL

Congratulations to Stuart Broad for being not out at the close of play.
Albeit only because play has been abandoned but still. #ENGvSA

Enthralling, albeit shortened, first day at Lord's #ENGvSA makes it even more infuriating that this world-class pace attack will only play a handful of Tests in home conditions over the next three seasons under the new Future Tours Programme.

Collingwood: “There were a few good balls in there but we will not worry too much about what happened today. The exciting part is to see how many runs we can get tomorrow and then it is over to our world-class bowlers. It is going to be a good Test match I think.” #ENGvSA

Quick tweet just backing up what I’ve said before but Pope is a serious, serious player #ENGvSA