Mohammad Usman’s fifty in the game against the USA was his 2nd fifty in a 50-over match for UAE.

The United States of America made a strong start to the tournament with consecutive wins against the United Arab Emirates and Scotland. They began the tournament with a successful 203-run chase in the 47-over match. They followed it with a 35-run win against Scotland defending their total of 282. The bowling of their pace bowlers in death overs made the difference in the end. The match between Scotland and UAE on Wednesday got abandoned due to rain. The UAE and USA teams will clash off for the 2nd time in this Tri-series on Thursday.

The Sharjah Cricket Stadium is expected to be under clear skies on Thursday during the game between UAE and USA.

USA became the first side to defend a total during an ODI in 2019 at Sharjah. They won the match on Monday by 35 runs against Scotland after posting 282. The figure of 282 is the average score across the three full 50-overs matches this venue has hosted in 2019. Unless some good death bowling like the USA in the previous match, we might not see totals under 275 getting defended.

Mohammad Usman’s fifty in the game against the USA was his 2nd fifty in a 50-over match for UAE. However, in other formats, he struck 13 fifties and a hundred in about 98 innings. Across 10 innings in One-Days, the pacer Zahoor Khan has picked up 19 wickets for UAE. Karim Gore scored 110 runs and also bagged 10 wickets across six matches during the Super50 Cup 2019/20. Cameron Stevenson took seven wickets and scored 89 runs across 5 matches in that tournament for the USA. He also took a 3-fer in the previous match against Scotland. 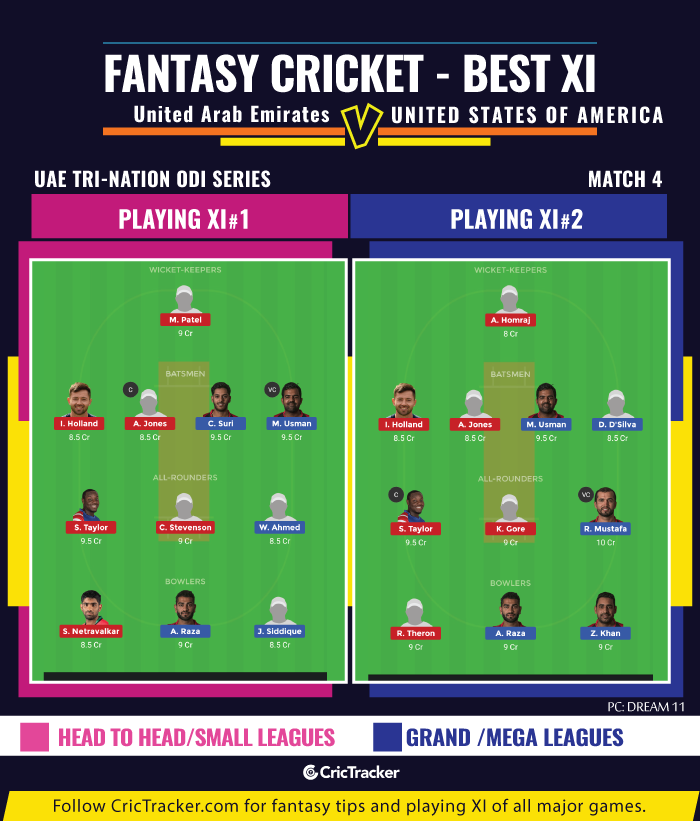 If the Sharjah track stays tad slower, we can pick an extra bowler. In case of a new track used for this match, an extra batsman can be selected as we could be in for a high-scoring match.

UAE could be seen winning their first match of the tournament.