Assad Vala continues to be a safe option as a multiplier.

The 6th game of the 2019 United States Tri-Nation Series is played between Namibia and Papua New Guinea (P.N.G) will be hosted by the Central Broward Regional Park (CBRP) Stadium Turf Ground in Lauderhill, Florida.

This game will be streamed live on YouTube by USA Cricket.

Namibia began the Tri-series with biggest of defeats but soon bounced back to return the favour to the United States of America. JP Kotze scored 136 to become Namibia’s first ODI centurion on Friday as they handed the hosts a huge 139-run defeat. They continued their winning momentum with a convincing win over Papua New Guinea on Sunday. Both Namibia and PNG will once again face off on Monday.

Despite no player scoring a fifty, PNG posted 219/8 in their 50 overs. Namibia started the chase slowly and lost a couple of wickets. But skipper Gerhard Erasmus (100-ball 88) and the last match centurion JP Kotze (43) added 124 runs for the 3rd wicket in only 23 overs to ease the chase. The PNG will continue looking for their first win of the ICC Cricket World Cup League Two 2019-2022 having lost all the seven thus far.

Lauderhill is expected to be under clouds throughout Monday but the chances of rain are not that high. The highest chance is after 4 PM by which the match might finish.

The game on Sunday was decent one as Namibia chased down 220 successfully. The change in pitch behaviour could be due to the usage of a different pitch. We could see a slower track on Monday.

Zhivago Groenewald has taken 11 wickets in three matches with two 3-wicket hauls and a 5-fer. Nosaina Pokana has 8 wickets to his name for the PNG team. Jan Frylinck scored a fifty against the USA and took two wickets in the last match. In the three matches, Assad Vala scored at least 38 runs and also bowls a decent number of overs.

Assad Vala continues to be a safe option as a multiplier. 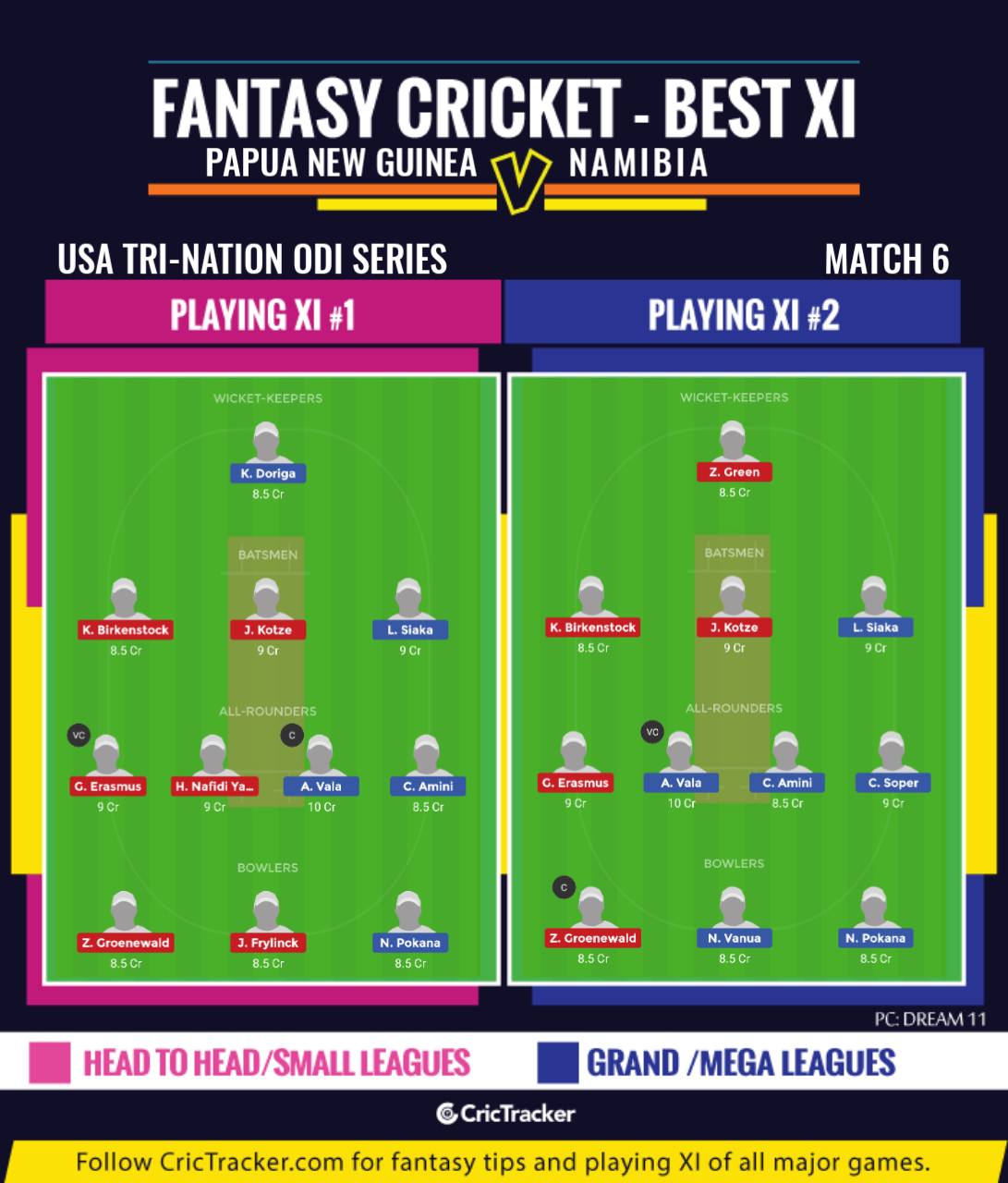 JJ Smith has failed to step up for Namibia in this tournament thus far which makes him a risky pick. He is in all-rounders category and picking him will block the inclusion of a player who has been consistent.

Namibia is expected to finish with their 3rd straight win.