Both the teams need to strive really hard to move up in the points table.

VCA Blue and VCA Green will go head-to-head against each other in the 15th match of the VCA T20 2021. Both the teams are placed at the bottom of the table. VCA Blue haven’t been at their best with the bat in the last couple of matches, where they scored 125 and 141 respectively, which is way too less on this batting-friendly surface. Their only victory in this tournament came against Sky Blue by 34 runs.

VCA Green, on the other hand, are also on the same boat. Massive improvements have to be made in their batting department as their batters are not doing a reasonable job. With one win and 3 losses, they are placed at the fifth spot in the standings with 4 points.

The conditions are favorable for batting. The chances of the wicket getting slower are more as the game progresses and we witnessed the same in this competition. Going with the flow, whoever wins the toss should bat first.

Satyam Bhoyar has impressed with his all-round performances in this competition. In 4 matches, he has scored 119 runs, with the highest score of 50. Bhoyar has picked up 5 wickets as well.

Ganesh Satish batted quite well in the last game against VCA Orange. He scored 25 runs from 18 balls, which comprised of 5 fours. Overall in 4 matches, he has added 60 runs.

Shreeyog Pawar is a good buy for your fantasy teams at 9 Cr. He smashed 72 runs from 43 balls in the last game against VCA Green, but couldn’t help his side to win the game.

Harsh Dubey is doing an excellent job with the ball for VCA Red in this tournament. In 4 matches, he has scalped 7 wickets and has also scored 24 runs with the bat.

BLU vs GRN Must Picks for Dream11 Fantasy Cricket: 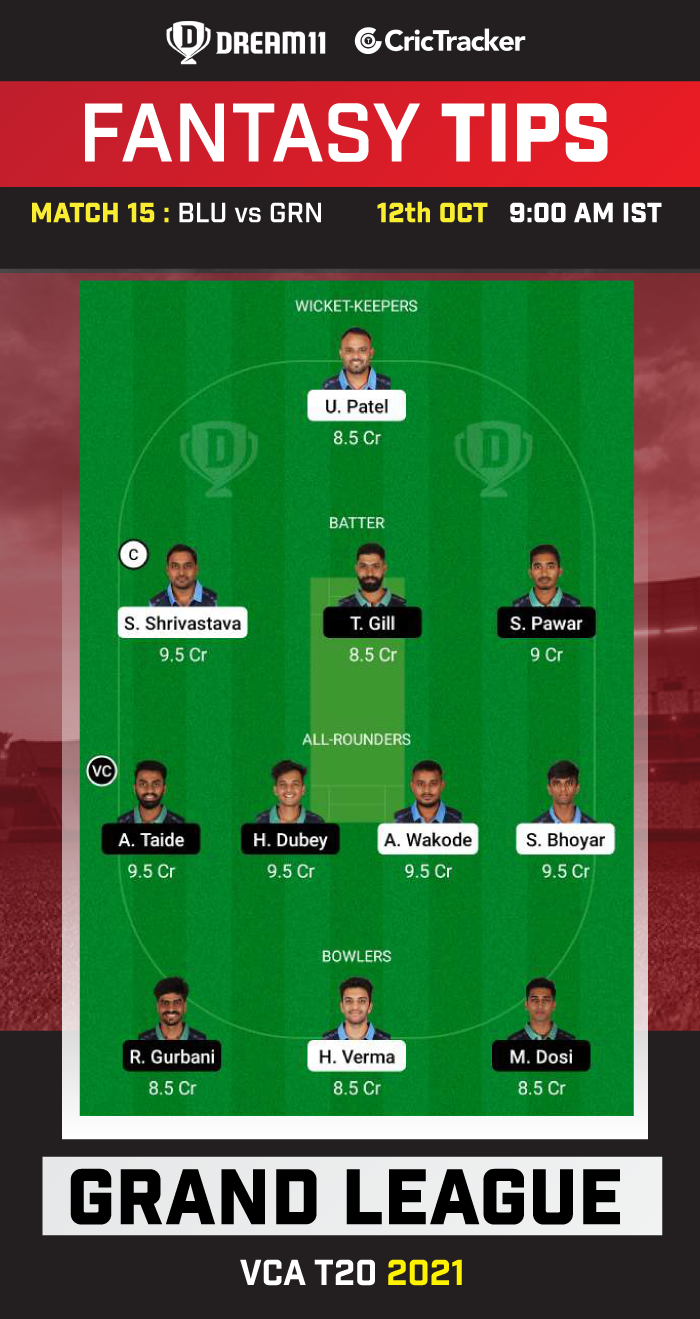 VCA Green are expected to win this match.