It is extremely tough to have all the favoured players in the team due to their high credits. You will have to take a few risks while picking your team.

The 2nd quarter-final of the 2019-20 Vijay Hazare Trophy will be played between Delhi and Gujarat at the Just Cricket Academy Ground in Bengaluru.

So, here we are then! After weeks of damp quibs, nail biters, humdingers, one-sided games and a whole host of match-winning performances with the bat and ball, we are down to the business end of the tournament.

The 2nd quarter-final will see Delhi square off against Gujarat. Delhi sealed their place in the top-8 courtesy three back-to-back victories in the closing stage of the league. They come into this game on the back of a three-wicket-win against Himachal Pradesh after they successfully chased down 177.

They’ll face Gujarat, whose eight-match winning streak was snapped by Tamil Nadu in their last group fixture and the Parthiv Patel-led unit will be looking to shrug off the blip and resume normal services, come the all-important quarters.

With a lot of rain expected, we might see a curtailed encounter where bowlers may come into play courtesy moisture in the pitch.

Rana has been a complete package this year. Apart from scoring all those runs, he has also picked up 12 wickets. He, along with the usual suspects like Pawan Negi (12 wickets) and Navdeep Saini (10 wickets) will be crucial to their fortunes. 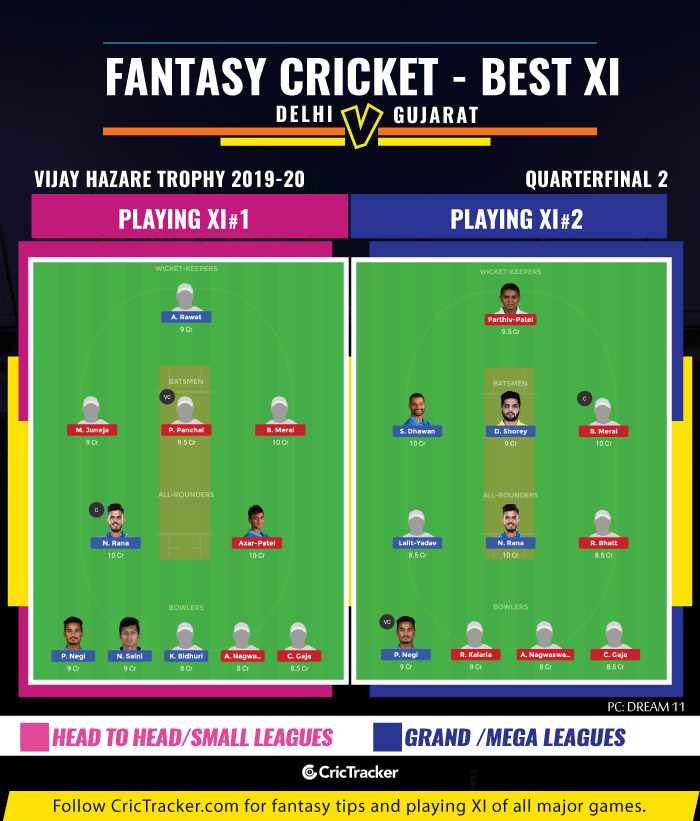 Nitish Rana has to be the captain of your Dream11 Fantasy side at any cost. A curtailed encounter might be on offer depending on the rain. So concentrate on picking more top-order players.

It is extremely tough to have all the favoured players in the team due to their high credits. You will have to take a few risks while picking your team.

Shikhar Dhawan could be picked in the team as he is a big match player. He could be made the captain of GL as only 37% of teams have picked him as of now.

It should be a close encounter. But considering Delhi has more experience of winning pressure games, they’ll start as slight favourites.