Manish Pandey, KL Rahul and Ambati Rayudu will be part of this match.

The Round 1 match in the Elite Group A of the Vijay Hazare Trophy 2019-20 will be played between Karnataka and Hyderabad at the Alur Cricket Stadium in Bangalore.

Karnataka will play their first match of the Vijay Hazare Trophy 2019-20 on the opening day of the tournament against Hyderabad. The Karnataka team won the 2017/18 edition but failed to get into the knockouts in the 2018/19 season. They will now play Hyderabad against whom they have not lost since 2003 in a One-Day game. The two sides faced off in 14 List A matches with Karnataka winning in 13 while another match ended in a Tie.

However, Hyderabad have been consistent since the comeback of their current captain Ambati Rayudu. They made it to the quarter-finals in 2017/18 only to lose against Karnataka. In the previous edition, Hyderabad qualified to the semi-final but lost to Mumbai by a big margin. Their skipper Rayudu announced retirement from all formats after the World Cup snub but reversed his decision a week before squad announcement.

Scattered Thunderstorms are predicted for Tuesday in Alur. The chances of rain keep increasing from 10 AM local team. There could be rain interruptions throughout the game.

The Alur Cricket Stadium hasn’t been a high-scoring venue during the previous Vijay Hazare Trophy. In 8 matches in that tournament, only three times the batting first side posted 250+. In six out of 8 matches the chasing teams won but only one of them was a 250+ chase. Slightly better track could be seen on Tuesday with teams scoring up to 250.

In his 16-match List A career for Hyderabad, K Rohit Rayudu has scored 755 runs at an average of 58.08. He scored three fifties and three hundreds including an unbeaten 121 during the previous edition semi-final against Mumbai. In the previous two seasons, B Sandeep also has similar numbers with the bat. He scored 683 runs at an average of 52.54 by scoring six fifties in 16 innings.

He is expected to bowl more overs in this season filling the gap of the 5th bowler. The Karnataka top-order batsmen Devdutt Padikkal and KV Siddharth have got the technique to excel in all conditions. The duo were successful with the bat during the recently concluded KPL which will give them the boost ahead of their maiden appearances in List A format. KL Rahul will be hoping to continue his World Cup success and get back into the Indian XI soon.

Krishnappa Gowtham bagged 24 wickets across 15 matches in the previous two editions of Vijay Hazare Trophy. He wasn’t that effective with the bat in those tournament. But his recent form with the bat gives hopes of him being consistent at scoring 30s and 40s at least. 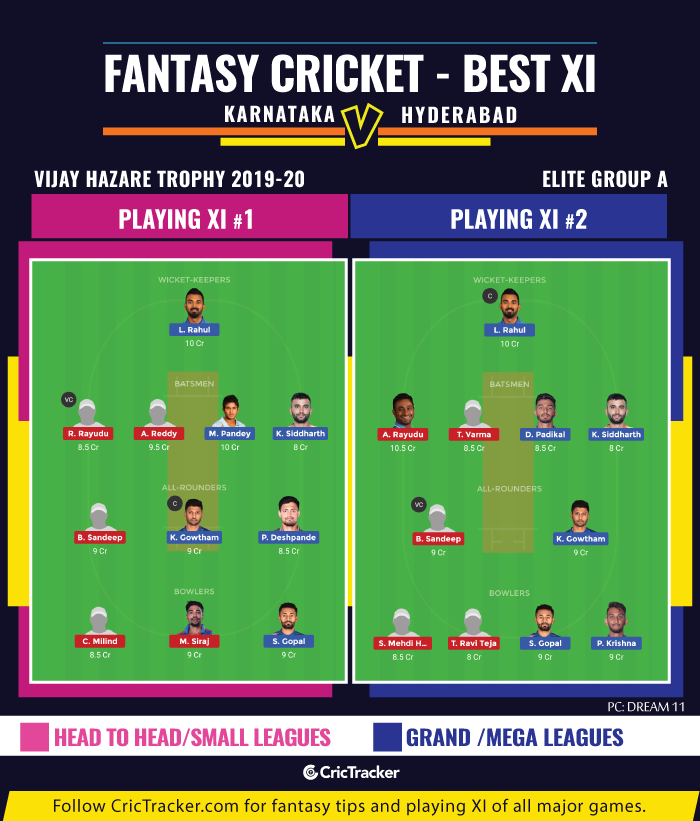 Manish Pandey and Ambati Rayudu might be restricted to scoring a good 50-60 runs. Rayudu generally bats at No.5 or No.6 for Hyderabad while Pandey could be seen shuffling around Karnataka’s batting line-up.

On the other hand, Thakur Tilak Verma scored a brilliant hundred during the recently concluded Youth Asia Cup and also impressed captain Rayudu. He has great numbers in One-Dayers but might not find a place straight away. Since he could bowl spin, the management could look to pick him ahead of the spin all-rounder Saket Sai Ram. to He could bat at No.3 or No.4 along with Rohit Rayudu.

Hyderabad could pip Karnataka to register their first One-Day win after 17 years.